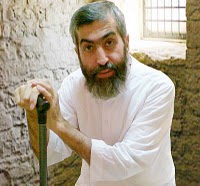 Human Rights Activists News Agency (HRANA) reports that Kazemeini-Boroujerdi was taken to Moddaress hospital by security guards on Wednesday, December 7th. Mr. Boroujerdi who has been ill and whose condition has been declining was transferred to the hospital in shackles, in order to conduct tests to further diagnose his condition. He was not however allowed to receive any treatment and following the tests, he was returned to prison and back to his cell.
Read more »
No comments:

The tension-enhancing efforts of the Islamic Republic are fast approaching dangerous levels.  Instead of taking positive steps in alleviating the ever increasing tensions surrounding its nuclear programs, the Iranian regime only continues to expand the scope of its political adventures.
Read more »
No comments:

Reports of illegal acts and tortures against political prisoners in Iran

Explanation:
This report includes human rights violations in the religious supreme leadership (Velayat-e-Faqih) dealing with detainees and prisoners. It has been prepared based on Mr. Seyed Hossein Kazemeini Boroujerdi's request and is based on his reports and direct observations from many prisons of Iran. It has been set under supervision of Dr. Roya Araghi, his vice chancellor in Human Rights.
Read more »
No comments: