Supporters of Kazemeini-Boroujerdi being fired from their jobs 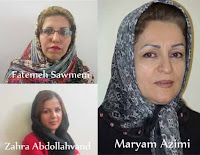 Translated and edited by: Banafsheh zand
The Organization of Human Rights and Democracy Activists in Iran reports that a number of the supporters of Ayatollah Kazemeini-Boroujerdi are being systematically fired from their jobs.

This wave of terminations began three months ago, prior to the elections in Iran and so far three of the female supporters of the detained cleric, have been ousted from their respective positions. Fatemeh Sawmeni, Zahra Abdollahvand and Maryam Azimi, were each employed by private and non-governmental companies, and despite their individual track record of excellence and professionalism were discharged without any prior notice.
Read more »
No comments:

Michael Ledeen -PJ Media
A brave and good man is dying.  Ayatollah Hossein Kazemeini  Boroujerdi is incarcerated in Tehran’s infamous Evin prison, as he has been since 2006.  He is routinely tortured, denied medication for his grave ailments (including heart disease), and under 24-hour surveillance by officers of the Intelligence Ministry.  This sort of treatment is reserved for Iranians judged to be a serious threat to the tyrannical Iranian regime.
Ayatollah Boroujerdi threatens the regime for two reasons:  he advocates toleration of all religious (and non-religious) beliefs, and, in keeping with Shi’ite tradition, opposes the involvement of religious leaders in politics.  Years ago, he said  “the regime is adamant that either people adhere to political Islam or be jailed, exiled or killed. Its behavior is no different from that of Osama bin Laden or Mullah Omar.”
Read more »
No comments:

July 24, 2013 - Andrew Bennett, Canada’s Ambassador for Religious Freedom, today issued the following statement:
“Canada strongly condemns the continued imprisonment of Grand Ayatollah Hossein-Kazamani Boroujerdi, a leading Shiite Muslim cleric, by the Iranian regime. Ayatollah Boroujerdi has reportedly been subjected to torture during his seven-year imprisonment in the Evin Prison in Tehran. He has been a critic of the Iranian regime’s heinous human rights violations. Ayatollah Boroujerdi is one among a large, untold number of Iranians in prison on politically motivated charges.
Read more »
No comments:

Translated and edited by: Banafsheh zand
The Middle of Ramadan is a reminder of the event where agents of the regime that feigns piety, stormed Mr. Kazemeini-Boroujerdi’s residence, attacking him and his supporters. The regime of the Supreme Leader which is based on nothing more than deception and lies, ordered the brutal attack on those faithful and devout, who were present and fasting. Their only crime was opposing and protesting religious fundamentalism, and the implication of religion into politics. To that end, this Ramadan, Mr. Kazemeini-Boroujerdi has issued a statement from inside Evin prison, which is published below.

Translated and edited by: Banafsheh zand
The Iranian regime agents continue to escalate pressure on dissident cleric Mr. Kazemeini-Boroujerdi. Boroujerdi, who has spent the last seven years in prison, has now begun receiving daily blatant threats against his life and has been told that he will be silenced by any means necessary.

Based on received reports, on Tuesday, July 15th, Jafar Ghadiani, the notorious prosecutor in the special clerical tribunal, personally paid Mr. Boroujerdi a visit and ordered him to keep quiet and make peace with the regime authority. Mr. Boroujerdi categorically rejected the demand; Ghadiani is reported to have replied: “We can kill you anytime we want and no one will be the wiser.”
Read more »
No comments:

An Open Letter to the New President of the Islamic Regime

Greetings. I offer you my congratulations in your new position as president of the government. I commend this letter of grievance to contemporary history of our land, Iran, so that it is placed in the record of political Islam.
Though I am a religious leader, my seven years of incarceration betrays the real identity of this regime that lays its claim to canonical law. I have been charged with opposing the merging of religion in politics. I surrendered my prime, my health and wellbeing, and have been witness to the total ruination of my family. As I pen this painful petition, I draw ever closer to death.
Read more »
No comments: 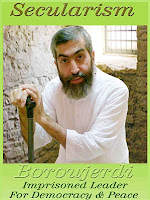 Translated and edited by: Banafsheh zand
Based on received reports, on Monday, July 8th, the special guards assigned to the dissident clerics ward of Evin prison took Mr. Hossein Kazemeini-Boroujerdi for a new round of interrogations, which lead to many hours of physical and psychological torture. The interrogation began in the afternoon on Monday and continued through till Tuesday morning where Mr. Boroujerdi was repeatedly threatened and as a result of his refusal to concede to the demands of the regime’s pressures by signing a letter of ‘repentance’, he was informed that “the pressures and tortures will increase, until he has been destroyed.”
Read more »
No comments:

Translated and edited by: Banafsheh zand
The Boroujerdi family has called upon all international human rights organizations to urgently intervene in the 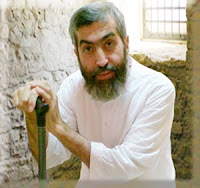 case of this and all other political prisoners. This letter has been addressed to these organizations and has been sent to various media outlets, as well as Iranian human rights and political activists.

The text reads as follows:

On Saturday, June 29th, 2013, members of the Kazemeini-Boroujerdi  family appeared at Evin prison to visit Mr. Boroujerdi, only to witness the exceedingly critical  nature of his physical condition. Serving the seventh year of his eleven year prison sentence, he suffers from numerous ailments that result from continual medieval tortures that he has endured. He has developed acute heart disease which has lead to the inflammation of his feet and knees. Now, in connection to the coronary complications, he has also developed pulmonary and respiratory disorder which requires immediate treatment and medical attention in a hospital which is fully equipped to attend to these specific infirmities.
Read more »
No comments: