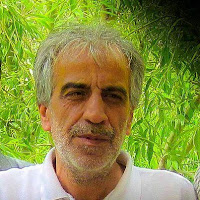 According to recent reports from Tehran to 'Human Rights and Democracy Activists in Iran‘, on 30 December 2012, Mr. Seyed Hassan Kazemeini Boroujerdi, 59 years old, apparently died of a heart attack just one day after visiting his brother, Mr. Seyed Hossein Kazemeini Boroujerdi, who has been jailed since 2006 in Evin Prison.
Read more »
No comments:

A Letter from Mr. Kazemeini Boroujerdi to Pope Benedict 16th at Christmas Time

Your Holiness, Pope Benedict XVI,
Greetings to you, dear representative of Jesus Christ on Earth, the light of God, the harbinger of peace and justice.Greetings to all Christians during this blessed time of year.
Read more »
No comments:

The Status of Mr. Kazemi Boroujerdi’s family in Iran

Mr. Kazemeini Boroujedi has suffered enormous losses because of his campaign against the Velayat-e-Faghih and for the separation of the state from religion. This has included the government’s murder of his mother, it’s persecution and mass arrests of his supporters, it’s numerous home and property confiscations, and it’s permanent surveillance, restrictions and pressures on his children and other family members.