Message of Boroujerdi , the Founder of Monotheism Without Borders on World Religion Day 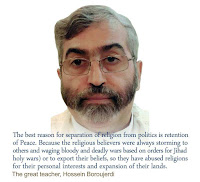 World Religion Day is reminiscent of many things, and the name, memories, rituals, or Shariah of religious beliefs itself is either uplifting or dreadful. Religions came for personal health; it comes for the elevation of the soul which in turn relieves and soothes the body.  Religion is used to expand justice in society. Religion seeks to establish consolidation of conscience, equality, and morality in the community to give people hope. When religion finds a bad place, either the subject or the object of violent behavior, filled with tyranny, makes a lot of shameful impacts, and it replaces rough empires.

Open letter from Hossein Boroujerdi’ Representatives Addressed to Vladimir Putin, in View of Supporting the Noble People of Iran

Dear President Putin
With greetings and all due respect
It is unfortunate that in our innocent country, people have always been involved in problems and dilemmas created by dictators. When we glance at the history of Iran, our country appears to have always been exploited either directly or indirectly by the Eastern or Western blocs, and at times concomitantly by both of them, namely during the Second World War when our country was attacked from the north by Russians, while the British and the Americans attacked our country from the south.