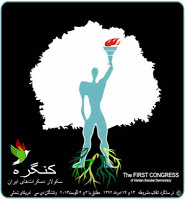 Translated and edited by: Banafsheh zand
The first gathering of Iranian secular and Democratic activists took place on August 3rd and 4th, 2013, in Washington D.C.
On the first day of the gathering of Iranians secular, several messages from various figures, among whom were the secularist cleric Mr. Kazemeini-Boroujerdi and Reza Pahlavi, was read out loud. Following that, a number of speakers delivered speeches about the constitutional revolution and rampant discrimination by the Islamic regime.

Translated and edited by: Banafsheh zand
This is the eighth Eid of Fetr where my life has been my offering (Fetri’eh) and my alms have been my body and soul. Is it truly the Eid of Fetr?
Is this the Eid of desperate Muslims?
Is it an Eid which is accompanied with torture and dictatorship, rather than sweets and celebratory food?
Do these Eids actually convey a message?
Is that message an inspiration of the grace of God?
Read more »
No comments:

Ben Cohen , Commentary
With the election of Hassan Rouhani as Iran’s new president, the international debate about reaching out to the “moderates” inside the Iranian regime has been reignited. But before we get overly excited at the prospect of a kinder, gentler breed of mullah, it’s worth revisiting one of the most heinous examples of human rights abuse in Iran, a case that involves a man who carries the honorific Shi’a Muslim title of “ayatollah.”
Over the last fortnight, the various Iranian emigre networks have lit up with renewed calls for the release of Ayatollah Hossein Bourojerdi. Bourojerdi, who has languished in Tehran’s notorious Evin prison since 2006, preaches an Islamic doctrine that is utterly at odds with regime’s outlook, in that he advocates the separation of mosque and state, and urges religious tolerance.
Read more »
No comments:

A report from Mr. Boroujerdi regarding the Supreme Leader's Prisons

A report regarding the inhumane behavior and religious inquisition in the dungeons and torture chambers of the Supreme Leader Ali Khamenei which as been prepared by the freedom-loving and anti-regime cleric who has been captivity, and has been provided for publication by Human Rights Activists for Democracy in Iran, in order to distribute among the various human rights organizations.

Western diplomats at the Rouhani inauguration Sunday should challenge him to release political prisoners.
The inauguration of Hassan Rouhani as president of Iran on Sunday has stirred considerable hope among some Western observers for the start of a new era of liberalization in the Islamic Republic. Mr. Rouhani may prove to be the reformer his supporters claim, but the luxury of such optimism isn't available to the hundreds of dissidents who have run afoul of the Islamic Republic and are trapped in its prisons.
Read more »
No comments:

Suspicious death of a supporter of Ayatollah Kazemeini-Boroujerdi

Translated and edited by: Banafsheh zand
The Organization of Human Rights and Democracy Activists in Iran reports that Mr. Mohammad Sawmeni, a supporter and relative of Mr. Kazemeini-Boroujerdi passed away on July 12th, at age 74. He was the father of Mr. Kazemeini-Boroujerdi’s daughter-in-law. Due to his family relation to Boroujerdi, he had, over the years, been summoned to the special clerical tribunal for interrogation during which time, he was repeatedly threatened. He had also been arrested, though released, by putting his property as bail bond.
Read more »
No comments: