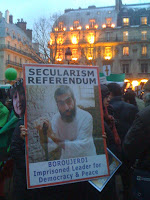 By a concerted and effective movement, our countrymen resident out of Iran ask for intervention of international organizations to stop the violation of civil freedoms and also unconditional release of political and ideological prisoners like liberal clergy Ayatollah Kazemeini Boroujerdi, from the prisons of Iran regime.
Iranian protesters in Europe and , in Malas Man square in in , Landon, and etc expressed their advocacy of right demands and protests of Iranian people.
It is necessary to mention that it had been brought in the report of the Working  Group on Ayatollah Boroujerdi’s condition on May 29, 2009 that:
On 29 May 2009, the Chairperson-Rapporteur of the Working Group sent a joint urgent appeal to Iran concerning Ayatollah Sayed Hossein Kazemeyni Boroujerdi.


According to new information received by the Working Group, Ayatollah Boroujerdi wrote
a letter to the Secretary-General requesting that international observers be sent to Iran, following which he was reportedly subjected to beatings.

I am with you in this movement.fraom A to Z.

please keep it on .

I am with you too.