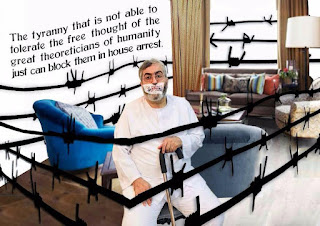 According to the recent report from Tehran, the agents of the Ministry of Intelligence and the IRGC's intelligence have repeatedly sent death threats against Boroujerdi via text message and suspicious telephone calls. Boroujerdi’s family believes that their personal safety is on the line because these harassing text messages and calls from anonymous numbers have been increasing.

Furthermore, due to a deterioration of his health and a high-grade fever, Boroujerdi was taken to a hospital last week. Boroujerdi had been injected with an unknown substance, soon after physical examination, by wicked and unscrupulous agents who disguised themselves as doctors. The effects of suspicious injections were revealed in the form of frequent loss of consciousness and stroke, and it also caused him near fatal falls from the stairs at his house. The falls have resulted in serious injuries, including kidney, brain, pulmonary, and cardiovascular dysfunction.

Since Boroujerdi’s release from prison on temporary medical leave in January 2017, he has been banned from delivering speeches and organizing ideological or doctrinal meetings in public. Furthermore, he has been facing continued intimidation and death threats by Iranian authorities. He became the target of assassination attempts several times, including being injected with poisonous substances three times, attempting to kill him through car crashes more than twice, putting high levels of pressure on his doctors and medical staff, stealing and/or destroyed his medical records and documents, and replacing prescribed medications with dangerous and unknown medicine or other substances. Recently, they injected poisonous substances into his body in the hospital in order to torture and kill him. It is readily apparent that he cannot benefit from immediate medical treatments in the hospital even outside the prison.

He was arrested and imprisoned in 2006 due to long advocation of secularism in Iran. Since Boroujerdi’s release from prison on temporary medical leave on January 2017, he has been effectively placed under house arrest, and all his civil rights have been denied by Iranian authorities.

Since 2011, Boroujerdi concluded that “separating religion from politics” was not working, and it cannot perform its role in human societies effectively. He believes that the fundamental problem is at the heart of all religious beliefs, by adding that we should root out the problems in all religious beliefs and practices and purify religion from error and superstition.  Boroujerdi has been writing his book called "Encyclopedia of Religions and Denominations" while serving out his sentences in prison. He found incompatibilities by searching and exploring through thousands of religious documents and historical texts. He states that the existence of gross contradictions in religious documents shows its ineffectiveness for all mankind. In 2014, the Prosecutor of the Special Clerical Court had allegedly threatened Boroujerdi with execution for the contents of his new book, which he considered heretical. Soon after, he was placed in solitary confinement in a quarantine cell for the death penalty.

Unfortunately, the authorities violated the rights of Borujerdi purposefully instead of providing this well-known critical figure and/ or his students opportunities for public debate and discussion. Indeed, the authorities deprived him of all his civil rights by adopting illogical and inhumane methods, such as death threats, social media boycotts, cyber-attacks on websites, restrictions on social networks, dropping his phone calls, and banning him from attending any event or meeting. In addition, Boroujerdi's students were forced to close their discussion rooms in the clubhouse due to recent threats by Cyber Police (FATA) and Iranian security forces.

Boroujerdi's representatives would like to bring to the immediate attention of all international human rights organizations that Boroujerdi's life is in grave danger as result of deliberate media boycotts, which had been imposed on social media inside and outside of Iran. His enemies are still trying to assassinate him by hiring professional mercenaries and infiltrators.

The Representatives of Boroujerdi, the Founder of Monotheism Without Borders

See the below links for more information:

Arrest and Torture of Boroujerdi's Supporters

Gastric Cancer: The Aftermath of Eleven Years Jail and Torture of Mr. Boroujerdi