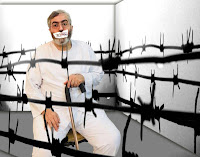 On 15 August 2019, the intelligence agents of the Iranian regime attempted to assassinate Mr. Boroujerdi by poisoning. Although he was severely injured, but fortunately he survived due to immediate treatment by assistance of his family and followers. Nevertheless, his physical situation still is not well since he is suffering from severe injury in larynx and intensification of his chronic pains of legs and stomach due to poison effects.
Such crimes are showing the arrogance of the Islamic regime in extensive inquisition and suppression of dissidents for expressing their thoughts.


It is necessary to mention that Boroujerdi, the founder of monotheism without borders, had been arrested in 2006 because of supporting human rights, opposing the religious government and disclosing the realities about religious beliefs. He was unfairly being jailed and tortured for eleven years during which he was several times assassinated. Finally, instead of being free after passing his jail period, he was only released temporarily on bail for medical furlough after several commitments to the state security organizations including never to meet people. Since January 2017, he is at house arrest and deprived of all his human and civil rights.
On the other hand, his case is still open, and the regime can anytime transfer him back to the prison. However, the politicians who are abusing people by religion and beliefs, the ones who know Boroujerdi as a serious threat because of his campaign of “No religion-No Politics” and despite of different pressures could not stop him yet, they are still trying to assassinate him. But absolutely they are unaware that Boroujerdi has enlighten the realities in the atmosphere of silliness and darkness made by dominating religion and politics. So definitely, they cannot silence him by such plots and the voice of Boroujerdi will be eternal in the mankind history.

The representatives of Boroujerdi
August 2019