The message of Mr. Boroujerdi, the Founder of Monotheism Without Borders to the Virtual Conference of the Parliament of World’s Religions, 2021 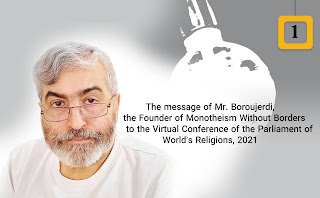 Greetings to all the founders of the parliamentary of religion, the world’s religious leaders, panelists, and symposium organizers,

Peace be upon all the prophets,

You have gathered at this conference to advocate your religion. Each of you belongs to a particular religion, faith, or spiritual belief. Many of your beliefs are not chosen; the majority of you were born to parents who live within a particular country and so your religion is something that you were born into and brought up with, and eventually, you will die in that religion. Then, you will find the great promise and hope that religions have offered related to the afterlife.

I wish you would consider attending under the title of “No Religion” in the 8th Parliament of the World’s Religions gathering. From where I’m standing, according to the historical documents and primary sources in religions, "No religion is a religion.” In other words, rejection of religious beliefs systems is a religion.