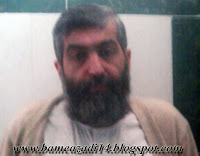 Human Rights Activists in Iran
It is about 80 days that Mr. Boroujerdi has been detained in solitary confinement in Yazd central prison under different kind of pressures and restrictions.
This ideological prisoner was transferred to the solitary confinement on April 30 and following his letter to the Secretary-General of the United Nations on April 27 that called Iran government illegal during it and asked for a referendum regarding this matter.
he has had at least a one-month-period hunger strike and was hospitalized in the clinic of this prison for a short time, during these 80 days.
This dissident clergy has asked for visiting the representatives of Human Rights organizations, international lawyers and independent media for several times, but not only no result has been seen as yet , but he is still deprived of visiting his family too.

it is very wild government that do such as this act.

i belive that this man is great. iranian government afraid of his religious power.

Mr.Boroujerdi is a real free man and he love his god from the bottom of his heart.i hope that he can be release as soon as possible.

prisoner are in bad condition in iran who can help them.please help them.

seyed hossein kazemeyni boroujerdi is free man and i belive his behavior.