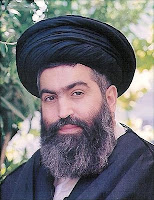 Human Rights Activists in Iran
to his attorneys and representatives in all over the world
A testament to my attorneys and representatives in Iran and all over the world
In the name of God the beneficent the merciful
Greeting to peacemakers and liberals personalities
Please accept my greeting behind the long and deathful walls of Evin prison. My trial was held behind closed doors and without the jury and independent lawyer and historian reporters and it was held on the base of baseless reasoning and making faked files in security and appalling 209 section and I couldn't defend my demands and rights and there were no body to pay attention to my thought and my words, so I write some words and register the mysteries of present history in the immortal pages of present century by you, ladies and gentlemen. It's 30 years that I'm trying for open thought and the culture which is free of dictatorship and I have been sentenced to the severest inhuman punishments because of my resistance against the governmental religion and political Islam. According to the evidences and documents of ministry of Information, during last 14 years I have always been pursued and under psychological and physical tortures and pressures by the oppressor and illogical factors of regime and they made faked files for me and tormented my family. I devoted my father who was one of spreaders and preachers of traditional Islam and guided theist people in capital of country for 50 years by his speech, writing works and Imamate (religious leadership) and was martyred , in cause of freedom and liberality and also my mother who had been hurt by microbial and chemical weapons during the invasion of armed forces to my house and died while suffered from disease for along time due to the effects of these weapons. I spent my youth period to old age in cause of belief independence of nation and I devoted my chastity and family and oppressors who have claim of religion, violated to my chastity and I think all these are the penalty of my attachment to the sacred triangle " God, people and country". I say belief inquiring is opposed to this word of God "there is no obligation in choosing religion" and suffocation is contrary to religion word containing" God wants ease for you in execution of religious orders" and imposing the hard laws is negating this God word that says " accepting of orders of religion, must be without pressures and torments on people", dictatorship is contrary to this Quran word" God gives human a duty according his ability", opinion suppression rejects the God word" The God isn't biased toward his messengers" , having prison is opposed to Imam Ali's way, I believe the peace of Imam Hasan Mojtaba rejected every kind of bellicosity, and capitulation of Imam Ali in Hakamiyiat event( a historical event in Imam Ali's age) showed the republic and his return from Sefein war ( a war in Imam Ali's age)expressed his respect to majority of votes and Shiite Imams' avoidance of governmental systems is a reason that clergyman must be away from political movements and the reason of agreement of Shiite references on avoidance of political places is that religion will be destroyed by politic . I call the result of governmental Islam on politic, economic, opinion and credit, the reason of people mistrust toward spiritual and theology affairs and obvious and public Human Rights violation in Iran the result of this slogan" our religion is exactly our politic" ,and tortures and torments on my family and my self and followers of religion freedom theory the effect of religious despotism, so I ask Human Rights authorities to pay attention to the regretful and grave situation of my family and mine and the situation of all followers of independence religion on government. the reason of invasion of security, information and military forces to my humble house was attending of huge population of opponents of political Islam in my unique meeting there for I ask the United Nations to ask Iran government to execute absolute freedom and independence of religion and (United Nation) condemn every kinds of pressure, fear, restriction, prison, siege and massacre for opposition to political Islam via Security council and ask for a basic referendum on freedom of opinion, press and religion without government interference in polling of all Iranian people and support and give me as a public prosecutor who ask for free worship and without restriction, an immunity till I can grant the human request of gentle, honorable and oppressed people of Iran and help followers of all theism religion reach to God .
At the end I ask all honorable persons who accept my attorney and representation, to inform all concerned countrymen about rough and grave situation of my family and mine and all prisoners who are tortured in medieval prisons because of their avoidance of Political Islam and governmental religion and to ask all civil and legal centers and formal and reliable societies in all over the world for our rights and to ask religious leaders of all religions and nations to try to purify theism manner from political intends and cooperate with this clergyman who is under pressure and oppression and to ask Iran government to stop oppression and torture on patriot theists .
Thank you
Seyed Hosein Kazemeini Boroujeri
Prison - Tehran - Iran

what is happen for our world? no boday answers liberals people and no boday wants to help them.
may be we custom to injustic.

calling for all of the people world:
helping Ayatollah Boroujerdi becuase he lost his life , his familyin ,his health in prison for our freedom . please signing this petition
http://www.petitiononline.com/Maat2/petition-sign.html?

just for informing:
one of the Ayatollah Boroujerdi's beliefs is equaity between women and men rights.

after transfer Ayatollah Boroujerdi's supports for performance their sentence , why government could not trasfer Ayatollah?

i am one of the Ayatollah Boroujerdi's support . I learned from him that no difference between humans . all of them have a single God and they have this freedom that choose their religion with out any pressure.

I aske God to help him.
thank you dear.