An open letter to the chief of judicial branch of Iran 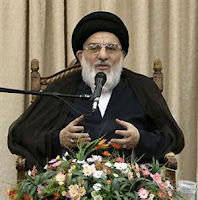 Mr.Hashemi Shahroodi
Greeting to persons who are in public service and devoted to God and country. The reason of sending this complaint publicly is that three years ago, when I came to your house in Qom for complaining of Special Court of Clergy, you answered I don't intervene in the affair that the Ministry of Information has intervened . Then I understood that efficiency of second power of government is less than the minister of Information! So I wanted to write my letter to the contemporary history till the news and secrets of political religion be recorded in the pages of contemporary calendar .
Mr. Hashemi; It's more than two years that I'm spending the time in the prison that is your subgroup and I have seen the figure of Human Rights defenders in your newspaper !indeed you play the role of libertarianism very well . But, today is the period of the vigilance of nations and such these tricks aren’t useful in the advanced world with media technology . What has been written on the heads of Hemayat newspaper with a large font is the confession of the first number of judicial branch that he calls prison as the place of torture, the seat of relentlessness, the center of anti- humanity and the reason of annihilating the family and society .
Mr. Hashemi; I had been witness to injustices and the obvious and multilateral violation of Human Rights, during my detention in Evin and I had perceived the uglinesses and villainy of here that prisoners will be gradually affected by them, with my nerves, feeling, mortality and situations . In the security sections tortures are raised and in public sections, negation of God, humanity degeneration and changing the human identity, madness and animal habits and tempers in sensual desires and these are the results of the thought that revolution establisher called it as university .
Mr. Hashemi; I have got old untimely and majority of my body members have become decrepit due to torments and annoys that you have done during more than two years on this son of prophet who his crime is lamentation for his honor grandfathers and lighting up the fire of love to them, and the Evin hospital is as a scarecrow to prevent from Human Rights advertisings and I have enough evidences to confirm this word . although my address is Special court of Clergy and I have heard from them that their power is more than yours, so I don't expect watch from you; but, the prisoner is delivered to the judicial branch and this center is responcible for him health and situations while its nutrition (of prison) is pathogen, its health is regrettable, behavior of its guardians is depressing and enduring its circumstance is not possible . As soon as poor prisoner protests, the protective Guard will transferred him to isolation cell and cut off his relation with family and sometimes they answer his his protest by suppression, hitting and broken .
Mr. Hashemi; I as a public prosecutor who ask for separating the religion from politic and the majority of Iranian people are in side of me, will soon sent my complaint against the government of Islamic Republic of Iran to legal courts of United Nations in order to the world knows the political Islam heritage that its 30-year-results are countable and also to the traditional religion of Iranian people be seriously defended by issuing a resolution in the security council of United Nation . I have notified the leader of regime of my critical physical and psychological state for several times but its reflex and result was only increasing the cruelties of special authorities and prison authorities . Now, I ask you as legal chief of judicial branch of country for my demands, although I know it wont be useful and effective .
At first; I ask for a revision of trial in attendance of without border reporters and the United Nations jurists because according to the words of the revolution followers and government relatives like Mousavi-KHouiniha and Abdullah Nouri; the Special Court of Clergy is not legal and lawful .
Second; I ask to be confined to bed in a private hospital with watching of the United Nations representatives and you are responcible for its charges . About expenses and charges; because the special authorities have seized all my belongs and about being under watching of United Nations; because special authorities have threaten to kill me, for several times .
Third; hundreds numbers of women, men, old and young were injured, wounded and imprisoned long with me, attend their complaints, some of these people such as my old mother were killed due to the intensity of officers attacks and the government denied permission to hold her funeral . I hope your actions be confirmed with your slogans .
Seyed Hosein Kazemeni Boroujerdi
Tehran, Evin prison, Oct 2008