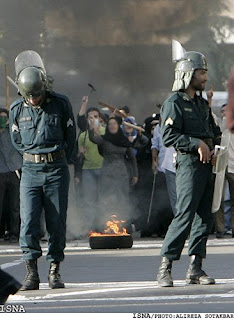 The declaration of followers of prisoner religious leader, Ayatollah Seyed Hosein Kazemeini Boroujerdi, to protest about second anniversary of detention, suppression and torture about him and his followers

He shone like a stare in the suffocated sky of religious despotism, a stare that its shine made ten millions of people who were tired of political religion dominance happy and hopeful.
2 years ago, in 16 Mehr 1385( 8 Oct 2006) concurrent with days of ancient Mehregan festival, bloodthirsty Zahak once more again cut his chains with assistance of Tempter and began the oppression and torture under the name of religion to revenge the children of blacksmith Kave ( an Iranian hero )
It's many long years that villainous Devil of unreligious government in Iran, uses religion ruse in order to annihilate nationality and defame the God and moral values of this country.
The life of this liberal Iranian during last years has always been in turbulent.
30 years campaign and effort, 14 years suffering, threat, pressure, detention, two years imprisonment under physical and psychological tortures, suffering from various diseases, murder of his father and his mother and some of his followers by Iran regime, assassinating his character, confiscating all of his properties, distress and torment and annoy of his family and followers by regime and other crimes of this devil regime, have challenged this indefatigable champion . the reason of all of these tortures and calamities is just his belief in separation of religion from politic and his insisting on his demands to defend of freedom, liberality and human rights. it's two years that this religious leader has been detained in prison but with an incomparable firmness and bravery without putting up with government, he thus accordingly insists on his demands from inside of prison and doesn't leave comaign,as has made judiciary officials of government and authorities of his siege tired . he shouts freedom from his dark and narrow cell and ask for helping to can inform the world about the demands of millions of humans who are prisoner in huge prison of mullah dominance in this auspicious country.
The events which happened during two last years showed that in despite of the threat, deceit, blowing rumors and the intensity of censorship that regime has used in order to distort and boycott the news about him and his followers, the people of world are aware and informed and the aware consciences and the seekers of truth have figured out the real nature of these false claimants of religion had asked for investigating of this file in the public and international circles immediately, with their cooperation and sympathetic and sometimes with expressing their opinions .
Now, we are on the threshold of second anniversary of tragedy of raid of armed security forces and the special guard of suppression of religious despotism government to the house of Ayatollah Seyed Hosein Kazemeini Boroujerdi and detaining him and his followers and we notify you that they are prisoner just for opinion . and detention, torture, imprisonment for hundreds days in individual cells, continuing their detention , closed trial in an uncommon court without access to an independence lawyer, applying the trumped-up-charges to them without any evidences or documents, and finally producing programs and partial using of governmental media such as Broadcasting organization and governmental newspapers in order to violate this famous clergyman and assassinate his character without any opportunity to defend of himself and his opinions, are inconsistence with the articles of universal declaration of Human Rights and even with the constitution of country.
So, we ask all of international legal organizations and societies , Human Rights defenders, aware consciences and liberal personalities to in addiction to more attention to these matters, help him to bring a suit against Iran regime in an international and impartial court and prevent from violation of Human Rights in Iran by their efforts in order to granting life and legal immunity for the peaceful and apolitical activities of Ayatollah Boroujerdi.these demands are not just a prisoner's demands but are the demands of a religious public prosecutor who speaks in representing of millions of people who are opposed to political religion..
Finally, we ask judicial and governmental officials for releasing him immediately and treatment of his injuries and diseases that are the result of tortures during two years in prison, and restitution of his prestige and also releasing his prisoner followers and ending to threats and pressures on his followers.
We thus accordingly insist on his demands such as separation of religion and politic, freedom of speech, opinion and press, holding an open referendum in all over the country in order to reject the religious government and abolishing some sentences and laws including: execution, stoning and flogging and removing the national, religious and sexuality discriminations .
With the hope of having a world full of justice
The followers of Ayatollah Seyed Hosein Kazemeini Boroujerdu in Iran and Europe
Oct 2008