The declaration of prisoner religious leader of Iran 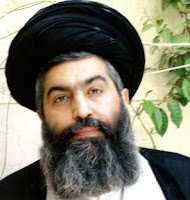 In the name of God the merciful and the gracious and greeting to afflicted homeland by despotism and salutation to oppressed nation of Iran that is disfavored by Iran dictatorship.
It's the third year that I'm witness of the massacre of deprived and oppressed people, under the name of subversives, bullies, spies, riotous, false claimants and sellers of narcotic substances, in Evin.
I became aware of the deep of committing crime and making calamity of political Islam and closely saw the medieval tortures of the executioner and tricky claimants of Islam, during my detention in various sections of prison.
I'm not penitent for devoting my youth in the cause of combating against the traitor to God and swindler authorities of religion and I'm proud to sacrificed my father and my mother and my health and took my family and my followers to the altar of history in the cause of revealing the nature of governmental religion.
When I was hearing the wail of my one-year-grandchild in appalling 209section of Evin, while my eyes were closed and my hands were chained and my ankles were shackled by the religious fogyish, I told to my tears: joint to the river of calendar of contemporary Iran to its tomorrow pages be as a rainbow of liberal resistance and future generations smell the scent of releasing from the despotism of marauder governors better.
That day that the army of ruling head police was attacked in Enghelab square by the followers of traditional religion and the shout of freedom of thought and culture which are different with laws of Regime, narrowed the space for the oppressor government, I understood that country of braves, will not sustained opinion censorship and advertising pressures of the mammonish and irreligious Mullahs. And that midnight when the armed Velayat Faghih forces attacked the gathering of woman, man, old, young and child who were gathered around my house and were dissatisfied with the terrorist and bloody Islam I understood that It's the time of downfall of 30 years lying and swindle of the irreligious regime of Iran and it's the time of public movement of honor, gentle and patriot nation.
So, I announce to human society because of the name of all religions God and because of the love to country which is under the oppression of fierce government, and by truth on natural and public ability of countrymen, and with the decision to save honor country from essence of devilish clergymen, I have started to protest against the usurpers of sacred country and I'm sincerely ready to die to uproot the theory of " our religion is that very our politic" and to offer the opinion and religious freedom and thought independence to exemplary people.
So, according to this great national and humanity movement, I ask all civil societies, legal centers in the world and the authorities in the side of Human Rights and opinion freedom to defend of this peace, justice and freedom messenger with the all force, and take my emancipator message to security council of united nations and sentence the obvious and continued violation of Human Rights in religious, opinion and thought affairs, by issuing a salutation, and appoint me as an observer of united nations in religious and cultural affairs and also appoint me as its ( united nations ) representative in region countries till I can guard the ideal of worship according public demands by receiving the international security and immunity, and protect spirituality and sacred of nationals and peoples against every kinds of limitations and prohibitions .
At the end of my words ,I ask the clergymen of all religions to help me "as a person who is opposed to opinion inspection" and reflex my request to the related courts, also I ask the great Pope for serious and continuing advocate for my rightful demands and expect him to ask Christian governments and nations in the world to help me, also I ask authorities of Alazhar society, Mecca Darolfatva ( a place in Mecca for issuing religious statements ), and other issue centers of religious orders to remove the charges and ambiguity about real Islam with help this prisoner clergyman, and also I ask the presidents of Russia and china, that are supporters of Iran, to ask for my absolute and disputable release, by putting Tehran regime in pressure. I notify the members of uncommitted movement, of human duties in respect of oppressions of Iran government.
Seyed Hosein Kazemeini Boroujerdi
Tehran - Evin prison – Oct 2008

Thanks for writing this.