Human being is the strangest creature in this world.
Mankind is loveable, so if the immoralities and evil beliefs would not prevailed over him and never dominated his minds, then Mankind will be the supreme creature. However, by development of manmade civilizations which was basically aimed to serve the mankind, everything turned upside down and the human beings without any option became as the captives of technology and science to serve. Hence the destinies of mankind are the disasters what we have observed such as poverty, pains, sorrows, addiction, enmities, divorced families, suspicion and mistrust.
So today is called the “Humanitarian day”, so that the mankind will know his values and recognize his divine worth.
Read more »
No comments: 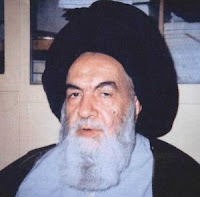 Preface
Iran as an ancient country with a great civilization, has been the land of Monotheism and religions during the history. During thousands years of the Iranian history, the clergy associations were always promoted and attained important social positions due to beliefs of the people, so the clerics had always an important role in the society. They were sometimes accompanied with the people and sometimes represented a part of power for supporting the rulers. 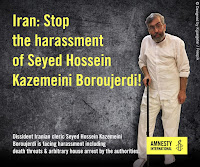 URGENT ACTION
HARASSMENT OF DISSIDENT IRANIAN CLERIC MUST END
Dissident Iranian cleric Seyed Hossein Kazemeini Boroujerdi has faced continued intimidation and death threats by the Iranian authorities since his release from prison on 4 January. He is under 24 hour surveillance and has effectively been placed under house arrest. He is critically ill, and could be returned to prison at any time.
Read more »
No comments: