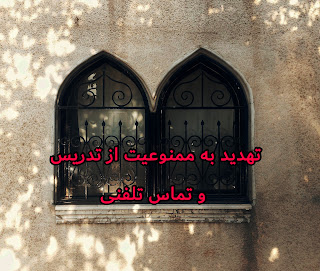 We would like to inform you that due to the following protests in different cities and using lethal force to crack down on protests in Iran, intimidation, and threats on Boroujerdi have been increased by the agents of the Ministry of Intelligence and Iran's Special Clerical Court.  In addition, using double pressure on Boroujerdi's house arrest, including attendance of a number of security forces around his house, as well as strict control, his house is still under 24-hour surveillance, and numerous disguised agents have been roaming all around.  In addition, incoming calls get disconnected after around 30 seconds, and his phone keeps dropping calls, automatically during the conversation. Making and receiving phone calls is disabled and blocked, even though WhatsApp.

Besides that, the agents of the Ministry of Intelligence and Iran's Special Clerical Court have been threatening and warning him via phone calls by saying, "We will cease your teaching in the virtual space soon." It should be noted that Boroujerdi's representatives overseas are not able to communicate with him due to these recently imposed pressures.

Using double pressure on Boroujerdi's house arrest, stationing a huge number of security forces around his house, and monitoring him via surveillance cameras on his daily commute, are all for the purpose of banning him from accompanying and supporting this recent freedom movement in Iran.