A Letter from Prison to Catherine Ashton 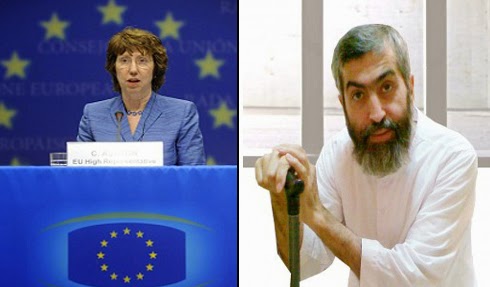 Greetings from the prisoners of the Fascist regime in Iran,

Those who publish content in defense of human rights and justice, stand against the ruling bullies and unscrupulous grabbers in our country, are moved by their superlative commitment. This defenseless nation, who for the last thirty five years has been deceived by the false slogans of the God-hating, materialist Mullahs is a noble and decent historical country whose national wealth they have now squandered in order to keep the likes of Asad, Hamas, Hassan Nasrallah and Maliki's longevity financed, and they run a muck in Bahrain, Gaza, Syria, Iraq and Lebanon.


They have killed and trampled on a most innocent, most enfeebled and most bankrupted people, on false claims; a people who seems to have no friends, no supporters and no helpers, in the whole wide world.

The contemporary history of our country offers proof to the most despicable and horrific crimes, the likes of which humanity has rarely, if ever, seen, and they claim that it is all done in the name of ‘the divine’. This has of course become the cause for the highly negative view of religion and the waves of ideological transformation which has lead people to turn their backs on spirituality.

As a cleric and a pastor who has spent most of his youth in prison, under physical and psychological torture, I am being systematically destroyed. As a result of my opposition to political Islam and my recrimination against mixing religion with politics, my voice which has been echoing the protests of the tens of millions of Iranians who are on the verge of total annihilation, I have spent the last nine years in prison. During this time I have been completely prohibited from having legal representation or receiving any medical treatment and prescribed medication for my many ever-worsening illnesses. All representatives of the United Nations have also been barred from visiting me.

I call upon all the freedom-seekers of the world to search their conscience and take action against these tyrants, in order to help us rid ourselves of this continued misery.

While the monarchic Mullahs have assigned themselves as the defenders of nefarious forces like Asad, and squander our national wealth on them, our people are daily driven to further destitution and privation. Statistics on unemployment, addiction, suicide, unspeakable diseases, divorce, danger and various other social ills whose numbers skyrocket on a daily basis, is kept hidden by the dictators, in order to  bamboozle the world and so that no one knows the depth of the misery that the people of Iran have endured.

I therefore call upon yourself, a high ranking representative of the West who is in negotiations with the treacherous regime to meet with me, or to send your representative for a visit, so that I can explain these painful, hidden realities of this Islamic Revolution. The fact must be exposed and their propaganda must be demystified.

They have brazenly prohibited Dr. Ahmad Shaheed from entering Iran, so that they can continue perpetuating the dirty secret of their cultish rule, behind closed doors.

Please pay me a visit, before I die at the hands of the bloodthirsty rulers.