One of uncommon instance of Human Rights violations in Evin prison 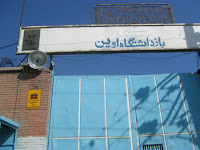 According to the report received, on Thursday morning, April 8, 2010; a very dangerous psychopath has been transferred to special ward for clergy where Mr. Boroujerdi is detained. According to this fact that such these patients are abused as a means to torture prisoners physically and psychologically and even to ruin them, so such this dangerous action is an obvious instance of human rights violation in Evin prison.
The relevant authorities have said in reply to the protest of the prisoners that: “this patient has psychological stress and crisis and we are not responsible for any of his behaviors.”
Considering this fact that authorities of a prison are charged with providing the health and life security of all the prisoners of that prison, so Evin authorities are responsible for every kind of events which may be taken place by this patient, and they can’t never acquit themselves by planning such these machinations.

I condemn this dangerous.

Mr.Boroujerdi have to be release before that they kill him.

I don't know what I should say. only it's so shameful