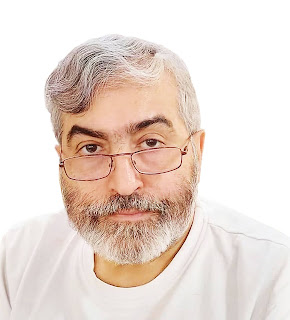 To the individuals and organizations that follow Mr. Boroujerdi's situation:

Unfortunately, the websites related to Mr. Boroujerdi is facing many problems, which are in fact cyber-attacks similar to those mentioned in our October 12, 2020 statement. This time, the English section of the blog ran into another problem and our efforts for restoring it to its previous address were unsuccessful.

We would like to inform you about the change of the address of “Bame Azadi” English blog, and from now on you can follow the English content of “Bame Azadi” blog through the following link:

Also, with regards to the latest update of his condition, in addition to the cases mentioned in the statements dated April 23, 2017 and October 12, 2020 (the links below), the following items are mentioned.

We hereby announce that Mr. Boroujerdi's physical condition is deteriorating day by day instead of actually improving. He continues to suffer from the past aches and pains that he endured during his eleven years of imprisonment because of undergoing tortures - such as back pain and knee pain, in a way that he is unable to have a restful night due to his pains. Both of his knees are affected by ankylosis or joint stiffness and are swollen. Recently, the tightness and stretching of the tendons and arteries behind his knee have been added to his former complications, which, according to him, are so severe that he cannot move at all. His respiratory problems have also become aggravated, which, of course, worsened due to living in a polluted area of ​​the city in the center of Tehran, and it is necessary for him to be transferred to another area or city with pollution-free air. Both of his hands are shaking severely.

Medical examinations have ruled out the possibility of Parkinson's disease which had been diagnosed by the prison health authorities years ago, but early in the medical leave period that began on January 4, 2017, post-MRI examinations by doctors showed that this condition is related to a defect in an area of ​​the brain. The nerves related to the hands are so badly damaged that he is unable to eat or drink properly, and the contents of his glass or spoon fall off involuntarily when eating. The condition of his gastrointestinal tract is such that his stomach continues to have problems. According to Dr. Sadeghi, an internal medicine doctor, he has a benign cancer in his stomach, which has its roots in the nutrition and shady drugs he was given during his eleven years in prison.

Due to threats and interferences by the Ministry of Intelligence, most physicians refuse to provide the results of medical examinations to Mr. Boroujerdi's family, and when confronted with his persistence, claim that his file and records are missing.

He has also been subjected to continuous ill treatments, including three poisonings, two-staged accidents with the intention of killing him, pressure on the medical staff, and the stealing of his medical records, changing his medications, and prescribing counterfeit drugs: He practically cannot be hospitalized and as it is not safe for him and his life can be endangered there. For example, in the case of Ayatollah Seyyed Kazem Shariatmadari, who was assassinated in the 1980s - he had been admitted to Mehrad Hospital after his support for the Muslim People’s Party, but despite the fact that he was not ill and was not old, his death was announced the following day. Therefore, Mr. Boroujerdi's family is worried about him and even has doubts and worries about the vaccine being given to him, and as a result they are currently avoiding his vaccination. Thus, the living conditions of Boroujerdi and his family are extremely stressful. The same mental and nervous anguish contribute to the problem and prevent the rehabilitation and treatment of his ailments and suffering.

He is also denied health insurance and government aids. We wish to remind you that Mr. Boroujerdi and his wife and children are banned from working in government offices, and even their employment in non-governmental companies faces serious obstacles, and as a result this has seriously worsened the family's economic situation. His children have been denied the right to study at public universities for many years now and have been placed in the list of “students with asterisks” (i.e. banned from continuing their studies).

Mr. Boroujerdi is still deprived of his civil rights; he is not allowed to hold classes, meetings and cannot meet with his students. He is not allowed to travel to some provinces of the country, including Khorasan, Zanjan, Kurdistan, Khuzestan, etc. While he was on his way to Mashhad, the IRGC intelligence based in the airport detained him for several hours and interrogated and threatened him.

Despite all the physical, mental, family, economic, and security problems that exist for him, Mr. Boroujerdi (63 years old) continues to fight in order to eliminate religious discrimination and to gather information and express inconsistencies and incompatibilities of religion with human rights. This courageous scientific and cultural movement is very practical and necessary to break the paradigm of sanctification and remove the thoughts of religious sovereignty from the minds of believing people. Although he has no political party or activity, yet he has been repeatedly persecuted by government agents and threatened and warned because he challenges Islamic beliefs as an expert and researcher. These activities in view of restoring human rights in a country ruled by a totalitarian Islamic government are courageous and unique.

Supporting those who sacrifice their and their families’ lives and assets in helping achieve and promote human rights and the development of justice, freedom, and peace will develop and improve the human rights situation around the world. Thus, human rights organizations can take full advantage of the achievements of these brave and impactful people who are left by themselves in the country, while the lack of support from human rights organizations and individuals increase the burden on these brave people and makes it harder for them to endure the situation.