Who is responsible for the life of the tortured prisoner? 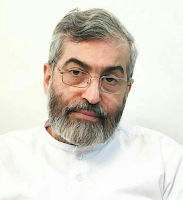 Mr. Hossein Kazemeini Boroujerdi, a prisoner of conscience (politico-ideological prisoner), who was sent on a temporary sick leave on January 4, 2017, following the deterioration of his physical health, after having provided substantial collaterals and various guarantees to the security and judicial institutions, is under rigorous security and intelligence surveillance and is unable to establish contact with people and to engage in any kind of activity and work.
He was examined by an orthopedic doctor, a neurosurgeon, a cardiovascular specialist, an ophthalmologist, a kidney specialist and an urologist. After having studied his records and his health condition, the doctors conducted several diagnostic tests including blood and urine tests, X-rays, MRI and CT-scan from his neck, thorax and spine, both knees and legs, as well as an electrocardiogram, ultrasound, and an electromyography. The test results revealed the seriousness of his health condition, requiring many kinds of treatments. After the completion of tests and X-rays and various medical diagnoses, decisions were made with regards to treatments of his serious health issues. According to the doctor’s opinion, he requires several surgeries, however due to his poor health and cardiac insufficiency, along with financial difficulties and the high cost of treatments, currently he is unable to undergo surgery; instead he is taking dozens of medications every day.
This former prisoner of conscience is unable to have a normal and regular life. We, as the representatives of Mr. Kazemeini Broroujerdi, consider the oppressive religious regime of Iran, and the leader Mr. Khamenei to be responsible for the physical downfall of his health, as the so called Special Clerical Court (SCC), operates under the direct supervision of the leadership, and its rulings are not carried out without his approval. Hence, by referring to the question raised by six respectful European Parliament deputies expressing concern with regards to the procedure of his medical treatment and methods of dealing with this prisoner of conscience, we continue to request that the freedom, justice and human rights activists pay attention to this case and his situation.

Do not allow the regime’s crimes to be forgotten one after the other; the Iranian regime and judicial authorities should be accountable for their actions and the tortures and crimes which they commit with regards to innocent people; keeping silent in the face of these kind of crimes is tantamount to collaborating with the regime; therefore, we ask all to break the cycle of silence and boycott against Kazemeini Boroujerdi and to react to the injustice that he is being subjected to.

The Representative group of Mr. Kazemeini Boroujerdi
The following report describes the results of the ailments and physical and mental condition of Mr. Boroujerdi during the last three months:

1- Condition of the bones: He is suffering from severe pain in the lower back and neck area, making any movement of the neck painful. He also suffers from severe pain in his knees and especially the right leg, and is currently unable to walk even by using a cane, and needs assistance from others in order to take a few steps. In addition, he is unable to stand on his feet, and due to severe pain in his legs, at night time, he is unable to get some rest; when moving his body to a different side he gets cramps in his veins and as a result is unable to sleep. His right leg is deformed and both his legs are swollen, making it impossible to put on clothes. Even though he is 58 years old, yet his body is even weaker than a hundred year old person when trying to walk.

Both knees are swollen and he suffers from Ankylosis, and as a result the knee muscle has limited mobility and is very painful. Also, there is pain in the legs, the knees and the bottom of the feet. During the past two years, major pains started appearing throughout his body, which seem rather unusual, and they are gradually becoming more intense and widespread; after examining the MRIs taken on his knees, the doctors have diagnosed that he suffers from severe arthritis and bone erosion, and his knees are seriously affected and the knee cartilages and meniscus are completely damaged; as a result medicines, aqua therapy, and other procedures are non-responsive and considering the extent of the symptoms and his inability to walk, the only solution is knee joint replacement, because both hinge joints, including the meniscus and the cartilages are impaired and the talus bones are severely damaged.

Further examination by doctors has revealed that considering his various ailments, such as cardiovascular and other illnesses, the replacement of knee joints is not an option at the present time, and if carried out, may result in serious side effects. Both of his legs are very swollen which indicate a vascular condition, such as a blood clot in the leg veins (thrombosis) and kidney disease.

2- Eyesight: Both eyes have cataract, and the left eye has a corneal laceration, and the eyesight in both eyes is very poor, and according to his Ophthalmologist due to his general physical health, surgery is not an option right now, and only medications have been prescribed for treating him.

3- Dental exams: that were carried out revealed that one third of the teeth were damaged, requiring specialized treatment.

4- He suffers from a chronic lung condition and is often short of breath (asthmatic). Also, due to injury to his larynx and the throat, he suffers from hoarseness and experiences difficulty when talking.

5- The examination of the blood test results indicate that his blood iron levels are surprisingly low; also due to malnutrition in the prison, he has low levels of vitamins and minerals.

6-  Neurological conditions: Both his hands shake a great deal. At the prison dispensary he was told that this is due to neurological pressures, however after three months of resting outside of the prison, these shakings have not stopped.

These severe physical injuries are due to the conditions of incarceration and torture as explained below:

Six months out of the first two years spent in the special ward 209 of the Evin prison which were accompanied with severe tortures; one example is while trying to obtain forced confessions and admittance of having contacts with George Bush and Tony Blair, the U.S. and U.K. leaders of the time, he was being hit with torturing tools and his cerebellum was even injured in the process, resulting in continuous unconsciousness for a few days. Following this, the authorities of the regime who were weary of being accused of his murder, using an ambulance of the Ministry of. Intelligence in Evin prison transferred him in the middle of the night to Jam hospital and admitted him in the emergency room under a fake name as a person who was injured during an accident. After taking his vital signs, they took x-rays of his head, face, neck and spine, and then he was returned to the prison.

Also, during his imprisonment in the special ward of Evin prison (which is run by the Ministry of. Intelligence), he was being injected with unknown and suspicious drugs. The widespread ailments and health conditions which he has developed could be due to the injection of poisonous substances which he received during eleven years of imprisonment through injections, food and drinks, and contamination of his bed.
The situation of hygiene and nutrition in prisons is very unfavorable, and the fact that even the cats in the prison refrained from eating the food that was given to Mr. Boroujerdi, is very revealing of this fact.
At the local dispensary of Evin, there are no effective medical diagnosis equipment or appropriate treatment possibilities. Many prisoners, after numerous visits to the dispensary, have been inflicted with incurable diseases leading to death. Prisoners, except in rare cases are not given the possibility of attending medical treatment facilities outside of the prison.
During the eleven years of continuous imprisonment without leave, he was transferred to Modares hospital in Tehran two times, accompanied with military escort and all security and protective systems, but both times he was returned to the prison without further treatment or medical examination.

During the eleven years of imprisonment, because of protesting against inattention towards his basic and legal rights, as well as the rights of the Iranian people, he resorted to hunger strike several times, which resulted in the aggravation of his physical condition. In addition, despite follow-ups by his representatives and some International Human Rights advocating institutions, no independent doctor was given the authorization to see and examine this prisoner. False and incorrect responses were provided to follow-up queries and questions asked by the special UN reporters inquiring about his health and physical condition, without providing medical proof and documents to show that he was in good health.
The extent of physical and psychological damages that he has endured are so extensive and severe that his health condition has not improved during the three months that he has spent outside of the prison, on a temporary sick leave, and even with the improvement of conditions of hygiene and nutrition, and care by his family, unfortunately he is still suffering from numerous ailments and pains.