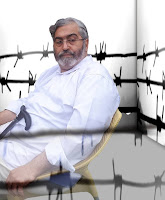 From Representatives of Boroujerdi to Public

Following the increased pressures on Boroujerdi, the former Iranian prisoner of conscience, the Islamic state of Iran continues to persecute, arrest and torture his followers and supporters. Since the majority of the Iranian nation have become tired of religious rule, and Boroujerdi’s research, ratiocination and studies based on both religious contexts and wisdom is demonstrating that the religion substantially has not any rational foundation, the intelligence agents of the regime and its think tanks have planned to force him to turnabout by using new political tricks.


By imposing power and torturing of supporters, the regime’s interrogators are collecting some fake confessions to defame and assassinate Boroujerdi’s character and create a new criminal file against him. Such ridiculous charges and file making which is a proof of what the regime leaders’ brains are busy with, is so vulgar to the extent that they have accused Boroujerdi of having sexual relations with female supporters. Whereas this prisoner had been jailed continuously for eleven years spending mostly in solitary confinement without a single day medical furlough while he had been deprived of medical treatment or having lawyer and his body has been completely demolished, as a result of which he is still suffering from different diseases, this new scenario is totally nonsense and unreasonable.
It is so unfortunate that the intelligence services of Mullah’s regime are accusing Boroujerdi of having immoral sexual relations, while the medical and clinical proofs signed by doctors (attached) demonstrates that he has lost his physical strength including sexual performance since long years ago. His body has become so weak that he is not able to carry out his daily activities or to have a normal life. This is the consequence of eleven years of being tortured within the Iranian prisons and later being deprived of enough medical treatment during house arrest after temporary release in January 2017. Currently Boroujerdi is under continuous monitoring, deprived of to meet relatives and supporters and he is not authorized to hold any teaching classes or assembly with presence of his followers.