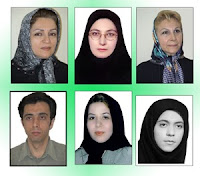 According to the report received; 6 numbers of the followers of the imprisoned opponent of Vilayat-e-Faqih, Seyed Hosein Kazemeini Boroujerdi, were arrested and transferred to an unknown place on Monday night Oct 8, 2010. Mr. Mohammad-Reza Sadeghi, Mrs. Maryam Azimi, Tayyebeh Hoseini, Forough Hemat-Yar, Narges Ghafarzadeh and Roya Eraghi are the people who have been arrested by the suppressor regime of Vali-e-Faqih only for their advocacy of Mr. Boroujerdi. As yet no clear and explicit charge has been stated about them. It is clear that such this illegal arrest is done to put more pressure on Mr. Boroujerdi to leave his opposition to Vali-e-Faqih and resign himself to what the regime wants.

It is necessary to say that although Mr. Boroujerdi is in the risk of blindness and paralysis due to severe tortures in prison, but as yet he has not leaved his opinion and has not submitted to what the regime wants. He has called the leaders of the regime to have an open debate several times in order to give his reasons for the necessity of the separation of religion from government and proving the illegitimacy of Islamic Republic regime.