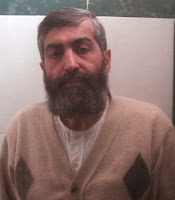 According to reports received from Evin prison on the 7th of April 2016, the agents of Intelligence services, in an inhuman act, placed poisonous ingredients in Mr. Kazemeini Borojerdi’s food, hence poisoning him, as a result of which this prisoner experienced severe pains, in particular in his legs, and his eyesight has been severely affected, and currently the situation of his health is considered to be critical.


This is while having served 440 days in individual cells, and 3370 days of imprisonment in the medieval type prisons of the Velayat e-Faqih (Guardianship of the Islamic Jurist), the 11 years of sentencing for this prominent religious leader, as a prisoner of conscience has come to end, and he should have been released in April 2016.
Since over twenty five years, this religious leader has been preaching and teaching theology minus it’s political aspect, and due to his position in view of separation of politics from religion, and his support for the Universal Declaration of Human Rights, he has endured the most severe tortures, and has been deprived of medication and treatment during his imprisonment. In addition, during his term of imprisonment, he has faced several assassination attempts, endangering his life, and conditioning him towards a gradual death. Finally, by creating a new case against him and submission of an order for apostasy at the Special Court for the clergy, he has verbally been accused of “Heresy and contradiction with the religious interpretations of the religious leader”, and currently by poisoning him and depriving him from getting medications and treatment, the regime intends to physically eliminate this critic of the Islamic regime.
Given these critical circumstances, and considering the difficult conditions and lack of safety for this religious scholar, we, as the representative of Mr. Kazemeini Boroujerdi, ask all international Human Rights organizations, and those with an alert conscience, to apply all their efforts in view of his liberation.