The message (2) of Mr. Boroujerdi, the Founder of Monotheism Without Borders to the Virtual Conference of the Parliament of World’s Religions, 2021 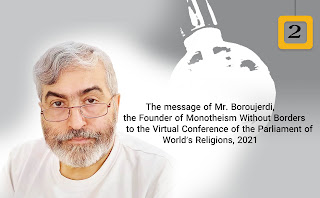 What does religion mean for you? The general definition of religion is a set of organized beliefs and practices that leads us to God. What is your understanding of sharia law? The Sharia literally means the path, course, or route followed by people. What is your understanding of religious people? A religious person is a person who strives to fulfill God's commandments in all aspects of their life. A religious person is someone who is committed to ethics and beliefs of a religious ideology, school of thought, or intellectual tradition that clarifies their obligation and the role of their lives. In spite of everything, you are all educated in your religion.

I was a clergyman for almost thirty-five years, and I hold different positions including, the congregational Imam, lecturer, orator, and author. Then, beginning in October 2006, I was imprisoned for eleven years. I tried to delve deeper into my beliefs and thoughts and examine them in detail. Prison is known as the penitentiary in which the prisoners express regret after committing a crime. For example, a murderer, who causes the death of a person, feels constant regret in prison. They blame themselves for their faults, and for not being able to control themselves at that moment. Even thieves feel remorse for what they have done in jail.

By the same token, I became aware of the enormity of truth, and I was filled with remorse too. Exactly at that moment, an inner revolution flared within me; the thoughts ran through my mind_ I was asking myself who is really the principal of the prison? Who is accountable for my imprisonment, and for what crime have I been accused of imprisonment? Because I had not committed any of the common crimes in the country; however, my only crime was my unique beliefs and thoughts that put me in prison for eleven years. In fact, prison gave me an opportunity to think deeply for months and months and examine my situation. I came to the conclusion that there must be defects in religions; otherwise, my life should not have ended in prison.

What promises has the Qur'an, the central religious text of Islam, made to mankind? And what messages did the hadith, as the second source of the Islamic religious law, convey to us? Have their promises and messages shown any signs of defense for the oppressed people against the opposition?

Until they attacked my house in 2006, I had not been involved in any political activity. As a religious leader, I have strongly advocated for a separation of politics and religion. In other words, I believe that " we should not mix religion and politics. However, after several months of logical thought, I began to research and study the materials and sources about Islam inside the prison(library). I started my research by reading more than thousands of Islamic textbooks. Since I was released from prison on medical leave, I realized that I am no longer the person I used to be eleven years ago. My awareness raised, and I moved away from my past perspectives, beliefs, and thoughts. In the course of my research, I discovered all the internal contradictions in religions that indicate the violation of the obligations and promises of religion situated on the inside.

In the past, religion gave me a structure and frame. I was a religious person, and as an Islamic religious leader, I preached, and I was very successful in attracting followers. For instance, in the last meeting on religious issues, which located in the largest indoor Shahid Keshvari stadium in Tehran city. The whole stadium was full, also the inner streets were covered by people, the outer streets were also full of participants.

Well, I concluded that there are no differences between religions, and all religions including Islam, Christianity, Judaism, and Zoroastrianism revolve around themselves. In other words, religions were unable to provide moral and religious education to followers as they promised. So far as we can tell religions were supposed to purify their followers by removing contaminants. While strange sins are common among religious people, they say that hell is where those who fail to follow religious instructions. They are trying to postpone the rewards or punishments to billions of years later. All religions are supposed to express exemplary morality, justice, compromise, conscience, fairness, justice, peace, and tranquility. Furthermore, they avoid violence, divorce, and discrimination against their followers, but practically this is not true. After I came out of prison, I continued my studies under house arrest. Now, I have comprehensively reviewed over a thousand books in both Shiite and Sunni contexts and evidence that are part of their religious sources.  I have reached the conclusion that there is a missing link between us and our creator, and this missing link blocks our way and prevents us to focus on our creator.

Indeed, Religions themselves cause violence, which expresses the inefficiency of religion. As an example, the violence that comes in the form of a religious removal of a body part such as a left arm or leg is considered capital punishment for apostasy from Islam. On account of this, who is an apostate?  An apostate is a person who is tired of the Islamic faith while this God introduces himself as a Merciful and Compassionate through revelation in the Qur'an.  People who are tired of religion are no longer interested in their ancestral religion. They want to leave Islam and their faith because thousands of questions have remained unanswered for them! What we have gained from the existing discrepancies and contradictions in the Qur'an, Hadith, and the narration of the Sunni and Shiite are raising our awareness about the function of religion. We realized that the god that the Islamic religion introduces is based on violence, slaughter, and assassination. They applied the greatest punishment for the smallest mistake.

On one hand, the Qur'an says that God armed the devil with power in the cosmos and sent him to the human world in order to deceive and seduce them, and on the other hand, for those who commit unlawful sexual intercourse, the Qur’an does stipulate stoning as punishment. Rajm or stoning in Islam refers to execution by stoning while men are customarily buried up to their waists and women up to their chests. Then an organized group throws stones from every side toward the guilty person. Little by little, the person's head becomes broken. The back becomes destroyed, and the brain comes out and dies!

In the same way, the most common form of capital punishment prescribed by biblical law was stoning as well; even though Jesus Christ never had wielded any sword, his followers had performed at the highest level of oppression. The leaders of the churches attempted to sell heaven to the public. Should poor people stay in hell while a rich person pays taxes to achieve heaven, even though they may have sinned a lot during their life? Indeed, this is obviously discrimination in the name of God!

History will not forget the performance of the kings, the princes, the rulers, and the empires who have committed crimes by using force, threats, and coercion in the name of Christianity. In the medieval period in Europe, when the church dominated the society in the history of Christianity, extensive crimes were committed; for example, scientists were killed, and elite or thoughtful people were burned simply because they believed in definitions that are contrary to the teachings of Jesus Christ. These examples represent something that Christ has never imparted. Also, Christ didn't have enough time to say it all because Jesus Christ's life in this world was short! The Crusades led to the deaths of many innocent people, and World War I and II began in Christian countries.

What can we do while the religions are ineffective and unaccountable to the public? The best option is to adhere to and follow the rule of waiting. Like a farmer, patiently waiting for the growth of the plants he sowed into the ground. Waiting for a living organism of the kind exemplified by trees, and plants that are growing. We are all waiting for the ruler of the universe to show himself because we do not believe in this God who is handmade and imposed on the people. We do not believe God created humans’ lives to be miserable. We are seeking to discover our principle to follow him through our research; we are waiting to follow the truth rather than a religion! Everyone is waiting! In fact, Christianity is waiting for the return of Jesus Christ! The Jews are waiting too! Various parts of the Torah have mentioned a savior as well. We are waiting too, but to live in civil society, we must have some rules to follow; therefore, we pursue the law of nature! With our consciousness, we become aware of our moral principles. We have a general sense of right and wrong, but we also understand how our actions affect others. Put another way, whatever is frankly disgusting for you don’t demand others. And vice versa, whatever is true, honorable for you, pass it on to others.

The best law is your consciousness because our conscience stands against resentment, misunderstanding, oppression, poverty, pain, insecurity, divorce, and addiction, while all these things have nothing to do with religion. People can have no religious beliefs but still follow conscience principles. On the other hand, religious people carry out many immoral things, but they try to interpret their actions in terms of religion to convince others.

According to the historical documents, we realized that the followers of religions and denominations were often exploiting others. In previous centuries, the essential famous European colonial powers were Christian. Their beliefs and practices acted as the "religious arms" of the imperialist powers. Each of them acquired several countries to accumulate needed manpower, wealth, and financial efficiency for their benefit.

In sum, we have concluded that the religions and denominations are feeble and inefficient in serving human beings, and even the religion itself caused humans to turn away from the true God. We inhabit a purgatory between religion and irreligion. We are moving towards truth and leaving the common religions because of the lack of fulfillment of their promises. We are moving from our previous beliefs and thought patterns to new positions. In other words, we are transforming by forgetting our ancestral religions and leaving them behind. We are moving towards a new stage.