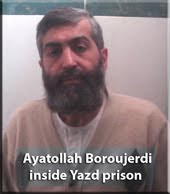 Human Rights Activists in Iran
On August 19, 2009, Mr. Boroujerdi was suddenly transferred from Yazd central prison to Evin prison in Tehran after spending 9 months of his 10 years jailing sentence in exile. according to eyewitnesses, this transferring was done under high and severe security considerations and controls.
This dissident clergy who has been detained in prison for three years is suffering from various physical and mental diseases. informed sources say that high pollution of drinking water in Yazd prison, his kidney and heart diseases and the lack of necessary care and medical equipments in addition to continued following up of his family can be the probable reasons of this transferring.
It is necessary to say that since 5th of May, 2009, after publishing the open letter of this ideological cleric to the UN Secretary-General containing calling present Iranian regime illegal and requesting international help to have an open referendum, he was transferred to solitary confinement in Yazd prison under different physical and psychological tortures. He has been on hunger strike for about one month to show his protest against this condition and he was hospitalized in the public health of prison, several times.

yes i think it is good for him.