The third anniversary of the savage attack of the regime claims to religion, to Ayatollah Boroujerdi’s house in the middle of Ramadan 142 (lunar year) 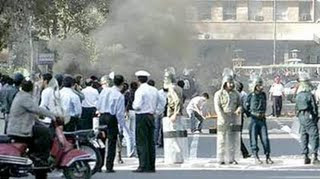 That day in the morning the security forces and governmental people (not in uniform) attacked to the residence of this religious leader savagely and by using all kinds of weapons, firearms and chemical gas and beat those Moslem people who were fasting and gathered there to prevent from arresting this liberal clergy. Until the sunrise in the middle of Ramadan tens of people were hit by bullet and transferred to the hospitals where were controlled by the Ministry of Information. More than 450 people were seriously injured during this savage attack and were taken to Evin prison. It is necessary to say that all family members of Mr. Boroujerdi such as his 6-month-old grandchild and his old mother were among the detainees.
At the present Mr. Boroujerdi who has unfrocked himself in the protest against illegitimation of this anti-religion regime, is asking for holding an open referendum and establishing a democratic and secular regime in Iran.
Also he believes in freedom of opinion and religion. Although Mr. Boroujerdi is suffering from lung, kidney and heart problems, but at the moment he is being detained in a very bad and critical condition without access to the least medical facilities.