The important statement of the leader of the Islamic Republic of Iran: 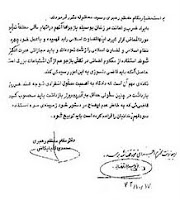 Mr. Khamenei the leader of the Islamic Republic, has announced in reply to the chairmen of his office about some judicial matters, that trial judges must pay special and more attention to solitary confinement and they must count each day in solitary confinement as 10 days in general section at least.


The political and ideological prisoner, Mr. Kazemeini Boroujerdi, has been detained in general sections for more than 820 days and in solitary confinement for 320 days since Oct 8, 2006 up to Nov 21, 2009, so based up on the above statement; he has totally spent more than 4020 days, equal to 11 years, in prison and his conviction period has come to end and Iran Judicial system must release him immediately.

According to the constitution of the Islamic Republic, Iran Judicial system has to obey and enforce the orders of the leader of government as the highest decision position.