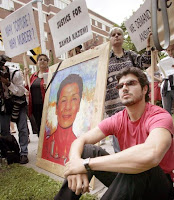 To the Prime Minister of Canada,

Two months and a half ago, a journalist contacted me, seeking my reactions to comments by your Minister of Foreign Affairs on Tuesday, January 11th. These comments were made in the context of the release of a report by an Iranian Parliamentary Committee implicating the former Attorney-General of Tehran, Saeed Mortazavi, in the death of three prisoners arrested during the protests which followed last summer’s contested elections. In response, the Minister reiterated Canada’s demands that Iran repatriate the body of my mother, Ziba Kazemi, and hold an independent inquiry into the circumstances of her arrest, detention and death at the hands of Iranian authorities in July 2003.
Read more»