10 supporters of Mr. Boroujerdi were summoned to the Special Court for Clergy 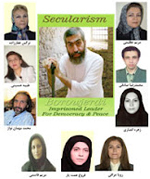 According to reports, ten supporters of Mr. Kazemaini Boroujerdi, who had all been previously summoned twice to the Special Cleric's Court in Tehran on Zafaraniyeh Street, were summoned to that Court once again for the third time via telephone on November 19, 2012.
Those summoned included Roya Araghi, Mariam Azimi, Tayebeh Hosseini, Narges Ghaffarzadeh, Zahra Abdullah Vand, Zohreh Sharif, Maryam Ghasemi and two men named Mohammed Reza Sadeghi and Mohamad Mehmannavaz. Earlier in both April and May of this year, the same people had been summoned to the same Court while Mr. Kazemi Boroujerdi was present in Court.Further news developments about this will be published at the same site.
These people  were  threatened and abused again in the court. Apparently, no observers were allowed in the court,  and denial of right to counsel. In the court, they had been under pressure to give a written undertaking that  they should stop the support of Mr. Boroujerdi, as well as they  never allowed to contact with  Mr. Kazemi Boroujerdi's family. Supporters were  threatened  that if they don' stop supporting this dissident leader, all of them would be arrested or be made to just disappear.

They were charged to moharebeh or "waging war against God ";  espionage against the Supreme Leader, acting against national security, active efforts to overthrow the regime,having links with anti-revolutionaries and spies, and releasing human rights news about Mr. Boroujerdi and other political prisoners