stand up to the bloodthirsty dictators, in the guise of holy men

Greeting to all you who are in attendance, Ladies and Gentlemen, 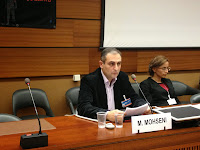 My name is Majid Mohseni and I am the voice of a prisoner of conscience, who has written to you who strive for human rights, from within Evin Prison. Mr. Seyyed Hossein Kazemeini-Boroujerdi has been in prison for seven year continuously.
Based on available information, the intensity of the pressure on Mr. Kazemeini-Boroujerdi has increased, in such a way that the Special Clerical Court prosecutor, only known as Haji Ghadiani, visited him personally in his cell and demanded his silence and cooperation with the regime. Mr. Boroujerdi who refused was then faced with a storm of invective and threat of death from said prosecutor. During the past seven years of his incarceration, Mr. Boroujerdi has been deprived of legal representation and has in fact not only been prohibited from medical furlough where he can receive the much needed and proper medical treatment.

Also, at present Mr. Boroujerdi’s family, friends and supporters are also under intense pressure to convince him to write a letter to Khamenei, in his own handwriting, repenting.


Here, I noted parts of his letter addressed to human rights activists:

Greetings to All Defenders of Human Rights,

I salute all those who are bound and imprisoned and who valiantly offer their one life to the cause of freedom and independence.

How can the pain of a person, who is subjugated by despots be felt, when an analyst, who lives in freedom, has never experienced the horrors of confinement, as such.

Humanitarians! Hours tick by like burdensome years for us, where we are fed the most harmful of foods, berated and our spirits are broken regularly; we are deprived of medical treatment and all medication, as well as refused legal representation. All in all, we are driven to death’s door.

Peace-lovers, where are the defenders of justice? Have we been excluded from the arena of contemporary history, so much so that our voices and pleas are not even heard by those effectual organizations, such as the United Nations? Have we, indeed, been buried in the heart of our epoch in such a way that the claimants to freedom of thought have lost interest in us?

Have religious leaders and clerical authorities of various faiths become indifferent toward the account of this humble cleric? And have they turned such a neglectful of the seven-year-long, physical and psychological trials and tribulations of another spiritual leader?

The imprisonment of courageous clerics, who fight for the ideals of deprived nations, does not know from exclusive and selective. I am an advocate of the people who has no bias against human dignity. I echo the suffering of a people who have no desire to stay under the yoke of politicized religion. I am a living anthology of a nation that demands the separation of religion and government.

In these last seven years of my incarceration, I have penned over seven hundred letters, pleas and statements to the various international organizations. I have written to various world leaders and informed them of the conditions of my incarceration. The Secretary General of the United Nations, members of the European Parliament and the Pope are among those to whom I have written, describing my predicament, asking for their intervention.

United Nations Special Rapporteur on Human Rights in Iran, Dr. Ahmed Shaheed, is aware of my situation and is informed of my letter writing campaign. However, unfortunately he has been unable to get any results where the Islamic regime is concerned. Therefore I remain in prison, spending my days and nights in physical and psychological misery hoisted upon me by a cruel dictatorship.

Thus, I call upon you fellow humanitarian to come to my aid, before I wither away, and help me reveal the brutality of this tyranny. All I ask, as an ailing and hopeless detainee, is that you assist me and my compatriots who suffer under oppression, in amplifying our voices to the world at large. Please do not allow us to be forgotten, as supporting us, is supporting those who aspire to peace and freedom.
In closing I would like to call upon all you who strive for human rights and the exposal of cruelty and inhumanity, to please, stand up to the bloodthirsty dictators, in the guise of holy men.
There is no need to repeat the price I have paid in confronting the oppression and brutality in Iran; however I will mention some of the most heinous of their acts. The regime has not had any mercy on anyone near and dear to me, from the youngest, to the eldest. My six month old grandchild was abused and violated in an interrogation in Evin prison, all so that the interrogators could force me to confess that I am an agent of the U.S. They then tortured my elderly mother by beating her with cables, batons, then punch and kick, again, for me to confess to being an agent of Britain.
At present, I suffer from various acute physical ailments. I am losing my sight, have suffered several heart attacks and have cancer, however I will not give in to the threats and manipulations of the wolves. Society is aware and the world does possess a conscience and even if my pleas are not heard right now, history will divulge the facts in decades and centuries to come, for all those who seek to truth.