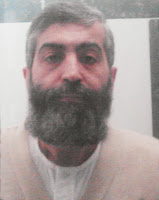 According to reports received by Human Rights Activists for Democracy in Iran," the family of cleric, Mr.Kazemeini-Boroujerdi were verbally abused, and were forced into violative inspection at the hands of agents from the Ministry of Intelligence.
On Saturday, November 30th, the Boroujerdi family went to Evin prison to visit Mr. Boroujerdi. There, they were confronted with severe physical inspections that were much more abusive than the usual treatment. Mr. Boroujerdi's family, including his wife and young daughters, who were verbally abused and insulted. They were even more brutalized when they dared to protest the guards conduct.
Worth noting is that Mr. Boroujerdi’s brother, Seyyed Mohsen Kazemeini-Boroujerdi was also insulted and abused by agents in the prison visiting room. He was also strip searched.

Agents who were the regular staff of the prison visiting room were no longer there and new people had been appointed by the Ministry of Intelligence,  specifically to conduct vulgar physical inspection. The Ministry of intelligence agents continue to step up their harassment of the Kazemeini-Boroujerdi family and friend, in order to force him into signing a handwritten letter of repentance to Ali Khamenei, which Mr. Boroujerdei has steadfastly refused.
The 55-year-old freedom-seeking cleric was arrested during a vicious attack on his home in 2006, where his extended family and a large number of his supporters were arrested. Mr. Boroujerdi who has been in prison since then, is now in during which time he has been subjected to some of the most unspeakable physical and psychological torture. He now suffers from various ailments that worsen by the day and he has been prohibited by the regime authority from receiving either proper medical care or legal representation.
For now, he remains under constant attack at the hands of agents from the Special Clerical Tribunal; he is being held in cell 325 of ward 7 which is that tribunal’s ward within Evin.
Orders for his constant harassed and assault is handed down by the Ebrahim Raiissi who is the Prosecutor General to the Special Clerical Tribunal, first deputy to the Minister of Justice and top member of the lead commission of the 1988 massacre.
Human Rights Activists for Democracy in Iran, condemn these offensive acts, harassment and vilification the the Boroujerdi family and call on the High Commissioner for Human Rights and other international organizations to end the brutality against of this imprisoned cleric and  his family.
Translated and edited by: Banafsheh zand