Prisoner conscience in Evin,Mr Boroujerdi has sent out profound greetings to the Christians all over the world and his compatriots for the new year threshold. 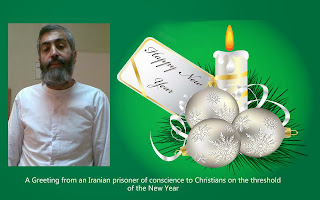 I offer my greetings to all Christians around the world on the birth of the Prophet Jesus Christ, and best wishes for the beginning of the New Year.

The great Godly spirit, the teacher of morality and humanity whose traditions and character, advanced  the conscience and virtue of mankind , wiped out the corruption and savagery of the spirit, and adorned the mirror of history with divine beauty.
Based on Christian teachings, politics is the macro management of humanity and materialism. And spirituality, is sanctity and dignity of being which provides guidance. The commingling of the two, spirituality and politics   conflicts and dulls spirituality of its radiance. As a result of the credit and appearance politicians can not be placed in the context of religion. Should a government which is based on politics and religion is erected or created, it will influence all things in its surrounding and will sacrifice spiritual laws to the interest of governance.
As per the control of the church, during the middle ages and was recorded in the pages of history, the creation of the Ottoman Empire discredited the name of God, driving people away from the alter of the Almighty and creating a negative view of faith.
Now, we too are captives of ruler who considers himself the substitute of the Lord and permits himself to commit any crime and sin and considers the people of Iran nothing more than insects, legitimizing and approving of all tyranny.
While I would like to extend to you my best wishes for a new year, my Christian compatriots, as well as my Christian sisters and brothers around the world, I would like to express the depth of my respect and tribute. Therefore I call upon all individuals throughout the global community whose conscience radiates the love of Christ, to lend a helping hand to this modest man of the cloth who has spent eight years in captivity, and who has given of his youth, health, future, family and relatives in order to stand up to political Islam. I have been deprived of legal representation and medical treatment and ask for the attention and assistance of Christian organizations , human rights groups and majority Christian countries to hear my pleas and prevent this murderous regime from suffocating me.

Translated and edited by: Banafsheh Zand

At this time, I have forwarded this plea for assistance to organizations here to aide in any possible means to end the suffering this man has endured at the hands of those whom continue to torment and abuse through the system which has allowed the inhumane acts to continue without being punished for their crimes! May God continue to protect Mr.Boroujerdi until he is released. Our thoughts and prayers are with you always.