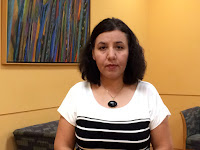 
In cooperation with Boroujerdi for advocating separation of religion from state in Iran, she was arrested twice in 2006 and 2010. She faced tough medieval conditions in prisons in Iran.
Their website is found here. An open letter by Ayatollah Boroujerdi from prison has been published by Clarion Project.
She graciously agreed to speak with Clarion Project Research Fellow Elliot Friedland about the Iranian regime, it’s human rights abuses and her organization’s vision of separation between religion and state in Iran.
Clarion Project: Your organization is based on the work of Ayatollah Boroujerdi, a senior Shiite cleric and supporter of the separation between religion and state currently a prisoner of conscience in Iran. In what ways do you continue his work?
Tayebeh Hosseini: The Boroujerdi Civil Rights Group conducts a variety of activities which directly support its central purpose of advocating, protecting, and supporting the basic civil rights of religious freedom, freedom of conscience, and the rights of women globally. We also oppose the religious tyranny and fundamentalism which interferes with such rights.
Our goal is to create the opportunity for discussions, cooperation and collaboration of civil rights leaders, activists and all those interested in promoting the globally important human rights values. We will also participate in and organize meetings, conferences, ceremonies and veritable networks. My colleagues and I continue his work through:
Translation and publishing of some books and papers against political Islam and religious violence which is written by Ayatollah Kazemeini Boroujerdi inside the prison.
Promotion of methods on how to train people to live in peace with those of different beliefs and tolerate them.
Communication with Human Rights activists and organizations worldwide to report human rights violence in Iran, especially the situation of prisoners and those tortured inside prisons as reported by prisoners and their families.
Media interviews and communication with journalists and reporters to inform the people about the latest situation of prisoners of conscience and other victims of human rights violence in Iran. We also promote Boroujerdi’s viewpoint regarding civil rights, women rights and other political/social discussions.
Clarion: How did you personally become involved with your organization? What motivated you to act?
Hosseini: Basically I was a teacher, so I was in a relationship with many different people in Iran. While investigating the source of problems and crisis in my country, such as religious violence, religious dictatorship, extensive violence against women and human rights, I found that the source of such problems is mixing religion and politics.
I concluded that secularism is a primary solution to save our society to achieve freedom, peace, justice and democracy.
However, in a religious society with traditionally minded people, secularism was equal to paganism and the people were not interested in even listening to such concepts.
So I was always thinking if only religious leaders themselves supported the separation of religion and politics that would be great opportunity to affect public opinion. That was the reason I have supported Ayatollah Kazemeini Boroujerdi who was advocating religion without political approaches: an independent religion in which the people pray to their God in peace and freedom without government interference.
He had a successful plan in Iranian society and I was trying to support him as much as I can. So my aim is to develop such peaceful plans globally and especially in American society where we have many different people with different beliefs and religious interests.
He was very popular and well known between followers of various religions, including Christians, Jews, Zoroastrians, and even atheists, this was unique in Iran. He preached against religious oppression and the corruption of the clerics in the employ of the government. He had emphasized to us that “there is no compulsion in religion.” Then, I learned about his campaign and efforts in exposing the regime’s human rights violations. I started my activities in organizing seminars and holding discussion groups and analyzing his sermon and teachings.
Now, as the president of our organization, I follow up our activities in a formal manner. I also coordinate his supporters’ activities outside and inside Iran. I directly communicate with different organizations acting in same way and exchange our experiences and information with them.

Clarion: What in your eyes is the single greatest impediment to human rights in Iran?
Hosseini: From my point of view, the single greatest impediment to human rights in Iran is the Regime: the laws of the Islamic state which is based on mixing religion and government. This brings about systematic violence of Human Rights and Civil Rights in Iran and stands in contrast to freedom and democracy.
Thus the religious leaders have established a religious dictatorship in which the people are being suppressed, arrested, jailed, tortured and executed due to their different beliefs and consciences.
For example, journalists were detained, often on charges as nebulous as “propaganda against the system,” or “spreading falsehoods with intent to agitate.”  The regime is accuses all of its opponents of being criminals on charges of “acting against national security,” “waging against God,” “religious innovation.” Consistent with their violent laws, they can even execute such innocent people. While these are the consequences of opposition to the religious state for Muslims, it’s clear what will happen to the members of religious minorities such as Christians, Jews, and Baha’is if they want to protest this tyrannical government.

Clarion: What are your strategies to bring about improvements in the human rights situation in Iran?
Hosseini: To improve the human rights situation in Iran, we should support and defend secularism, democracy and freedom of religion and expression. The Boroujerdi Civil Rights Group’s plan is to train the people for such modern humanitarian values. We should continue to inform that “the religion is never against human and civil rights.” Especially for the women, we try to change their mind to convince them that “since the Lord is kind and has created kindness and justice, so he never send his messengers by discrimination and violent religious laws.”
We should pressure the Iranian regime into meeting international standards. In addition, Iranian people need public diplomacy. In this case, by providing technologies, they can be enabled to speak freely, the more the Iranian public and the world will be able to hear their messages, and the better they can assert their views.
While the Iranian regime is deeply concerned about losing control over information technology and equally concerned that such measures will provide an avenue for highlighting its arbitrary practices.
These are what Ayatollah Boroujerdi believes and acts on accordingly. So we worked out for many years that religious laws should be updated according to modern human requirements based on new sciences.
Clarion: Finally, how will the nuclear deal affect human rights in Iran?
Hosseini: Although nuclear negotiations with Iran could provide opportunities to utilize diplomacy for improving Iran’s human rights situation, the subject of human rights was eliminated from the agenda and negotiations. They just agreed on some technological points and financial and economic sanctions. So the destiny of countless prisoners of beliefs and jailed innocent people were not important for the authorities and they just have considered their economic benefits and interests.
With a quick glance at the reports of human rights violations in Iran by international human rights organizations, the repressive elements within the security and intelligence forces and the judiciary, have retained wide powers and continued to be the main perpetrators of rights abuses. Executions have continued. Security and intelligence forces have arrested journalists, bloggers, and social media activists, and revolutionary courts handed down heavy sentences against them. Furthermore, Ayatollah Kazemeni Boroujerdi has faced new charges from the Special Clerical Court due to publication of his new book since April 2015.
We sincerely believe that the current deals and the final agreement are not proper to control the regime and prevent its leaders’ ambitions. They have a theocratic regime and they want to export their beliefs abroad. And they need superior power to do so.
We never believed in “Agreement OR War.” We think that there are a lot of other solutions apart of the current agreement far from violence. For example political sanctions are a simple way instead of extensive economic ones. If all countries close the regime’s embassies and consulates and declare that they never recognize them as the legal government of Iran, will the current religious dictators halt their military ambitions?
This can also be achieved by global support for a secular and democratic movement in Iran such as the plan suggested by Ayatollah Boroujerdi.