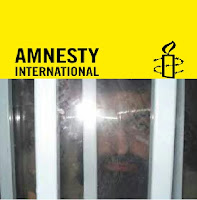 Iran’s criminal justice system is notorious for imprisoning people merely for peacefully exercising their human rights. However, the legal framework relating to the rights of prisoners guarantees, in theory that they should at least benefit from adequate medical care. Iran’s prison regulations require the prison administration to provide prisoners with regular medical check-ups, and ensure that their medical needs are addressed. They also provide that prisoners may be granted medical leave or transferred to treatment centres outside prison when the care they need is not available in prison. Iran’s Code of Criminal Procedure further authorizes judges to postpone the implementation of a prison sentence when imprisonment would exacerbate the illness of the prisoner, or to issue an alternative sentence if the individual is deemed too ill to serve.


The reality in Iran’s prisons is, however, very different. Amnesty International’s research shows that, in general, the prison regulations are flouted in practice and, in particular, political prisoners, including prisoners of conscience, are denied adequate medical care – a key human right which under international law and standards must not be adversely affected by imprisonment.
The 17 individual cases highlighted in this report, which present only a snapshot of the shocking cruelty suffered by political prisoners who have health problems, demonstrate that the denial of adequate medical care is generally not due to lack of resources. Neither have the Iranian authorities made this claim. Rather, there is strong evidence, in all the cases, that the denial is a deliberate act by the judiciary, in particular the prosecution authorities, and/or the prison administration.

SAYED HOSSEIN KAZEMEYNI BOROUJERDI
Prisoner of conscience Sayed Hossein Kazemeyni Boroujerdi, a dissident cleric serving an 11-year sentence in Tehran’s Evin Prison for peacefully expressing his religious beliefs, has serious medical conditions, including heart, kidney and respiratory problems, osteoporosis (a disease in which the bones become porous and liable to fracture), and loss of vision. He has also been complaining of symptoms associated with Parkinson’s disease, including muscle cramp, pain and limping, but he has not received any diagnostic tests.
Over the course of his decade-long imprisonment, the Special Prosecution Office for the Clergy has repeatedly blocked his request to access specialized medical care outside prison, apparently setting “repentance” as a precondition for allowing him potentially life-saving treatment. As a result, his health has progressively deteriorated.
Amnesty International understands that the prison authorities have also, on many occasions, refused to give him the heart medication, painkillers and vitamins that his family had brought in for him.
On 19 January 2016, Sayed Hossein Kazemeyni Boroujerdi was taken to the prison clinic as he was suffering from recurring stomach pain, nausea, vomiting and dizziness. It appears, however, that prison officials returned him to his cell the same day without providing him with adequate medical care. The next day he fell down a flight of stairs, hurting his abdomen and legs. It is feared that no treatment was provided for his injuries.