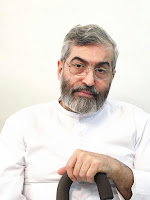 Mr. Seyed Hossein Kazemeini Boroujerdi is a progressive Iranian religious leader who advocates the separation of religion from politics, and supports peace, democracy, freedom and human rights. He initially began his religious and social activities in 1980 based on the concepts of Islam, which is the major religion of Iran. Meanwhile, at this time, the Islamic state of Iran was established based on the ruling of Islamic clerics. Mr. Boroujerdi, however, established a different movement in accordance with the peaceful aspects of the religions and promoted secularism.


During the 1990’s, he established a new movement in which he led benediction ceremonies in the presence of Shiites and Sunnis, Christians, Jews, Zoroastrians and Baha’is and followers of other beliefs. He called for the abolishment of execution, and cruel, inhuman, and degrading punishments such as torture, stoning and whipping. He rejected anti-Semitism and advocated religious freedom. He established charities and welfare centers for helping the poor and assisting victims of natural disasters and condemned personal financial gain from religious activities. His call was welcomed by an increasing number of followers to the extent that until his arrest his gatherings surpassed the theocracy’s organized ceremonies, by their sheer size and numbers.
The enmity of the Iranian regime against Mr. Kazemeini Boroujerdi began 30 years ago when he first went public with his support of the Universal Declaration of Human Rights and protestations against the abuses of theocratic rule.  He condemned Islamic fundamentalism, radicalism and terror.  He was and currently still is opposed to Velayet-e-Faqih, the system that rules Iran by clerical jurisprudence. Consequently, he has been jailed and tortured in the prison since 2006. So as a result of promoting Monotheism excluding politics, he devoted his youth and health whereas his family is torn apart and his belongings have been confiscated. This injured cleric has recently sent out for his first temporary medical leave since being jailed following critical deterioration of his health condition. However, he had been forced into accepting serious conditions imposed by the rulers, such as hefty bail amounts, bondsmen, and severe commitments including “never to meet people”.
Moreover, during his lengthy jail time, he has presented new ideas and approaches based on monotheism in order to dampen Islamic radicalism and to establish peace in the Middle East and the world. His new teachings have been compiled into a book which showcases a new scientific doctrine called “incompatibility of the religious contexts with the religious records”, which illuminates modern views on monotheism resulting in an ultimate peaceful approach to human livelihood and convergence between varying religious believers. Therefore, the Boroujerdi Civil Rights Groups is an organization established in United Sates based on Mr. Boroujerdi’s request to support its central purpose of advocating and protecting the basic civil rights of religious freedom, freedom of conscience, and the rights of women globally.
The Islamic Republic of Iran is a member of only ten of the twenty five human rights conventions, two of which are the Rights of Children and the Rights of Refugees. However, for example, the Islamic Parliament in Iran which attempted to pass legislation on the matter of discrimination against women or the prohibition of torture has faced serious opposition from the Iranian Guardian Council. Of course, the Guardian Council’s approach is rooted in the regime’s constitution which claims that Sharia law prohibits the Islamic Republic of Iran’s membership in those specific articles and the regime’s authority have emphasized that their government regards Islamic Sharia above the Universal Declaration of Human Rights. Also a perusal of the Iranian constitutional law clearly proves its contradiction to the human rights charter. Every time any discussion takes place in the United Nations, the Iranian regime persistently emphasizes that its internal laws override the human rights charter. Iran’s government continues to reiterate its own cultural notions over international standards and human rights laws. This is the regime’s take on Sharia, a Sharia that is entirely co-mingled with the regime and on a daily basis asserts and maximizes its total control over social and cultural institutions.
Hence, the principle of the separation of religion from state is a key and vital part of the elimination of the extensive and systematic human rights violations in Iran. Attention to this detail is exceedingly important and recommended as a preface to the proposed legislations at the United Nations.
Mr. Seyyed Hossein Kazemeini-Boroujerdi, a cleric who fully supports the substance of a secular government in Iran, has been in prison for more than years, for the simple fact that he believes and underlines the necessity of holding the Islamic regime in Iran accountable to the Universal Declaration of Human Rights. He has endured continued physical and psychological torture, but he has never wavered from his stance in this regard and has persisted with his campaign from within prison, which can be seen via his writing and published material. He is therefore one of the most important symbols of this struggle and religious non-violence in Iran. His effective efforts and plans are the best solution to make a new Iran and Middle East free from religious violence and inhumane laws as a result of the demonstrably incorrect interpretation of religious contexts.
He believes that if the United Nations produces a resolution in order to officially recognize and support the principle of the separation of religion from state, that human and women rights, free inquiry, freedom of speech, expression, religion, ethnic, gender and civil rights will be guaranteed and major strides will be made in the elimination of violence, sectarian wars and general regional conflict in the ever turbulent Middle East can be addressed.
As is, a noticeable majority of Iranians are resentful of the present regime. Should the esteemed and humanitarian government of Sweden support the much loved and devoted cleric, Mr. Kazemeini-Boroujerdi’s request, in a resolution that highlights the separation of religion from state, it will be a major step in establishing human and women rights in Iran, as well as the extension of peace among the followers of various religions in the Middle East.