The redefining of Human Rights by Boroujerdi At the commemoration of International Human Rights day, December 10 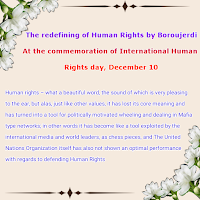 Human rights – what a beautiful word, the sound of which is very pleasing to the ear, but alas, just like other values, it has lost its core meaning and has turned into a tool for politically motivated wheeling and dealing in Mafia type networks; in other words it has become like a tool exploited by the international media and world leaders, as chess pieces, and The United Nations Organization itself has also not shown an optimal performance with regards to defending Human Rights!

Human Rights is at the same time a great deal and minimal; it is a great deal because mankind has many rights and not just one or two! At the same time it is minimal because if followed properly it can actually be achieved easily.  All humans have basic needs in order to survive, such as the trilogy of oxygen, water and food, which have to be secured; yet, are the seven billion humans on this earth provided with these basic, rudimentary and initial rights? Do the wealthy in this world and the nations which dispose of large underground resources and generally use them in view of conducting military transactions and paying for the cost of wars, feel any responsibility or accountability towards this?

Then, after securing these needs, it is freedom and independence which have to be provided and secured; freedom of speech, by which mankind can express himself when suffering, and can cry out and say: “My body is in pain”; there is no difference for the one who his experiencing emotional and psychological pain, and should also be able to cry out and express his pain; a crying out from the soul, for being chocked, for suffocation, for denial of freedom, for being enchained, being imprisoned, tortured, exiled, oppressed and discriminated against – these are all symbols of torturing of the soul and torturing of a suffering and ill body; and currently many are inflicted with illnesses in the world and have no means to pay for their treatment; many of their illnesses are incurable. The leaders of the world and those who hold high positions and ranks, those who are earning their livelihood in the name of human rights and advocating human rights, must be held accountable and should take action!

Independence - in the sense that God has created every single person as an independent person, who is free to follow any religion or tradition or belief, and the deprivation of this comfort and choice is in contradiction with human rights. Human Rights is present and has penetrated in all the aspects of a human life and should be observed and followed in all pertaining matters and levels.