It’s Not Left Wing, It’s Not Right Wing, It’s the Right Thing: No Engagement, No War, It’s Time to Support the Will of the Iranian People 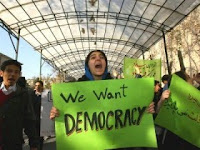 Published on 16 September 2010 by MN in Iran
National Security Law Brief: The Green Movement has evolved from “where is my vote” and demands of reform have shifted to demanding outright regime change in which a secular democracy is the end goal.  The slogan of the movement has become ”Esteghlal(independence), Azadi (Freedom), Jomhouri Irani (Republic of Iran)”. The overwhelming consensus among the opposition is for a secular democratic government which respects basic human rights but those people who come out and say this are then targeted and forced to fear the wrath of the Iranian regime desperately trying to keep hold of its last remaining vestiges power. One of Iran’s most respected and senior clerics, Ayatollah Kazemeini Borojerdy, who advocates separation of religion and government and has been put into prison under brutal conditions for expressing his views. Heshmat Tabarzadi, a leading freedom activist advocates the separation of religion and government as well as invocation and adherence to a constitution based on the UN Declaration of Human Rights. Mr. Tabarzadi spent nine years in Evin prison following the uprising in 1999 and after expressing his views which were published in the Wall Street Journal in 2009, he was again arrested and is currently in prison. In addition, Moussavi and Karoubi have noted the right of the people to chose their future for themselves.
There is snake pit of lies centered around the futile notion of a “Grand Bargain.” There is a dangerous delusion that has been permeating in D.C. now for some time of reasoning with the Islamic Republic of Iran. Snake charmers usually use the trick of enchanting snakes that have no fangs. An unpopular Iranian regime, (especially a nuclear-armed Iranian regime) is an untamable three-headed snake with vicious fangs that not only attacks its enemies and its own kind alike but spreads its venom to its neighbors and beyond. There has been a push by certain self-prescribed Iran experts to shed light on the conundrum that is the Iranian struggle. Instead of being “Progressive,” the ideas presented are actually “Regressive.” Instead of looking to the future with new, innovative, and proactive solutions that will benefit the U.S. and Iran’s people in the long term, they advance policies that rely on failed old world paradigms, Cold War-Era ideas of containment, and backwards logic that benefits only U.S. rivals.