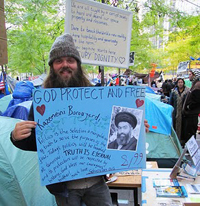 Campaign99: Note - the idea is simple. We have decided to talk with 99 people engaged in Occupy Wall Street Movement around the world. We will listen to each person's narrative of why s/he has joined the Occupy Wall Street Movement. Then we will narrate the life story of an Iranian prisoner of conscience for that person. After this mutual exchange of stories, we will ask the person to send a message to and make a poster for that Iranian prisoner. While s/he is holding the poster, we take a picture. If you like the idea, share it with your friends. This is for global solidarity.


Sebastian-- I am here because I am a Christian and I believe that America has fallen very very short on its moral values. In this country greed, vanity, pride, are all held up as something acceptable, whereas I think they cause evil in the world. I feel like America’s greed, vanity and pride has caused massive massive evil in the world. Now that evil is coming back to the people in this country. It has got to such a great level that people here are suffering. And this is the time that because of that we could wake them up. Because once people start to suffer, they start becoming aware that something is wrong with this world. And I want to bring that to people’s awareness, and bring love and peace to this particular protest as well. I believe strongly that God provides on the earth exactly what every person needs. So you know, in America we have eaten up resources in a massive amount to have a life that is indulgent and that has left people in other countries with shortage of resources, their economies are destroyed by Americans who are making deals with rich kings and rich rulers in other countries to rob their people of their wealth to make the few powerful people wealthy. There is no power structure in all the history of man that has not caused evil. Power should be something that individuals have within their own communities not ruled over by big kings or big emperors. Religious people recognize who is in connection with God. I think Bush believes in the God of money. The God that he claims to be the Christian faith tells you very clearly that if a rich person doesn’t share his resources, if he doesn’t give to the poor, if he doesn’t protect the innocent and the weak, and invades another country and killing innocent people, he does not believe in God. As a Christian I am taught these are the fruits of the holy spirit, love, joy, peace, humbleness, generosity, faithfulness.
Kazemeini Boroujerdi-- Ayatollah Hossein Kazemini Boroojerdi was born in 1958 in the town of Boroojerd located in West Iran. He is a cleric and an opponent of the Iranian regime and advocates the separation of religion and the state. He has been arrested several times since June 1995 for various reasons. His last arrest dates back to September 2006. That night he was in a house in West Tehran with a large number of his supporters. Following a raid with tear gas by the special commando forces to his house, a number of his supporters were killed. A few days before the incident, the Ayatollah in a message to his supporters had said “It’s strange that some accuse the USA and Israel of attacking Shia Muslims, while we are one of the most renowned Shia families and we are attacked right in the Shia capital itself! I fear that such attitude could provoke the nation’s anger.” Ayatollah Boroojerdi was tortured after his arrest and while he was under pressure he was forced to confess that he had links with foreign forces. His supporters believe that pressures on him are directly related to Ayatollah Boroojerdi’s opposition with the leader of the Islamic Republic, Ayatollah Ali Khamenei. The Special Clerical Court sentenced him to eleven years imprisonment. His family in a letter addressed to the United Nation’s General Secretary has expressed concerns regarding the lack of receiving proper medical care with respect to his poor health conditions in prison. Ayatollah Kazemini Boroojerdi has sent a letter addressed to human rights lawyers across the world asking them to take on his case. He is currently being kept at Evin prison in Tehran.

Sebastian: Boroujerdi! I am very sorry that you have had to suffer for your convictions. And I am very proud of you that you stand up for what you believe in despite the oppression of people over you. I like you believe that politics is the selection of truths to gain advantage, and this is so different from real truth. The politics of today will be laughed at tomorrow because it will be seen as being a half truth whereas truth is eternal. And if you stay committed to what you believe you will be always respected in history, if not in everyday that you live. Much love to you by brother and much strength to you, and we stand alongside you in your struggle. Here in America we suffer from great oppression, nothing compared to what you are suffering, and we have insight in what courage you show. Without courage there can be no other virtue. Much respect and love to you my brother. Stay strong