The Tenth Anniversary of Suppression of Mr. Kazemeini Boroujerdi and his Supporters 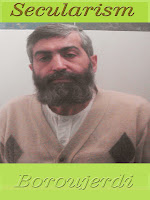 To the attention of honorable nations in the world,
Another year has passed - and once again the second half of the month of October reminds us of how Mr. Kazemeini Boroujerdi’s house was aggressed by the regime’s armed forces, leading to his arrest and that of his family and nearly a thousand of his supporters. A new crime is taking shape at this time, which will compromise history, freedom of thought, speech and expression for ever; and Inquisitions and interrogations of religious beliefs and the implementation of religious based monopolies will be harshly felt by all the oppressed people of Iran and the intellectuals of the world; and it is feared that freedom fighters and those who fight for justice and humanity will become victims of secret agreements signed by world powers.


Considering that the anniversary of the violent and brutal aggression of the religious preaching tyrants coincides with the UN National Assembly meeting, in fulfilment of their moral responsibilities and humanitarian obligations, it is necessary for the worlds’ liberal leaders to act as the echoes of his rightful and legitimate cries, and to oppose to the media censorship and the suffocation in place by the autocratic rulers, because during this decade he has endured the worst types of oppression, to the point that he is now suffering from psychological and physical ailments, and his body organs are failing and as a result he is in a dire need for medical treatment and specialized examinations. You are well aware that the deadly pains and agony of our contemporary age, is due to insecurities generated by religious rules and religious laws, which have appeared through groups, terrorist assemblies with cruel thoughts and criminal activities, and have endangered the world security. Therefore, if you study the thoughts and legitimate ideologies of this peace loving and freedom seeking theoretician, you will certainly be convinced about the concept of separation of religion from politics, and you will come to the aid of humanity that is being destroyed under the pinwheels of expansionist faiths and oppressive religions, and would show your strong support for this religious critic and scrutinizing religious figure.
this religious leader, who is in fact not constricted to a certain religion, is the precursor and preacher of a pure monotheism and spirituality minus politics, and has been promoting and teaching these ideas since over twenty five years. During this period of time, he has been subjected to the aggression of the rulers who claim to be religious and abide by faith, and has endured psychological, physical and family related tortures; and since ten years ago when he was last arrested, he is still living in the Evin prison. However, he has not given up even in the autocratic Islamic jail, and has created a spiritual and scientific circle among intellectuals and scientists, and has promoted freedom of ideas and has attempted to establish independence of thought - the product of which has been the publication of a book in which he condemns religious based violence and religious brutality.
By relying on valid and legal documents, he has revealed the ideas which are in violation of the concepts of human rights, and has exposed the secrets of the fake religious law makers and imperialists.
This politico-ideological prisoner is truly being punished for his lack of cooperation with the state clerics, and this kind of a long and severe punishment inflicted on him, which is bears hideous consequences, clearly indicates the hatred and vengeance of the rulers of Iran towards genuine and rightful and human embracing thoughts and ideas.
As his group of attorneys and representatives, we ask؟ you dear addressees, who are concerned with the current agitations of our era, and are bothered by matters such as massacres of civilians by organizations and Jihad type brigades who are acting under the banner of religion, to defend and speak about this leader who is enchained by political Islam, in all your legal international assemblies and in the news and media, and by exposing his peaceful positions in the important and valid scientific and news institutions, to show your support as those who are faithful and committed to the ideals of human morals, honour and dignity, and not to allow the imposed oppression, humiliation and suffocation by the dictatorial regime to continue towards him. Evidently, any kind of neglect towards his case will be tantamount to injustice towards history and will darken the calendar of the Middle-East.
Finally, we ask all independent and human loving reporters, to reflect reports about him and about his fate in their publications, as all the politico-ideological prisoners who are imprisoned in hideous and dreadful conditions behind the walls of the Evin - conditions revealed many times through reports sent out by him, are awaiting your assistance and the spiritual and material welfare that you can provide for them.