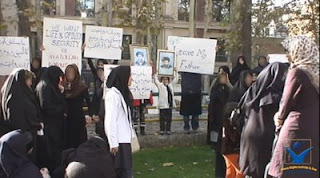 The gathering of Ayatollah Boroujerdi's family and followers in front of the United Nations office in Tehran
Human Rights activists in Iran
Following the inattention of relative authorities in special court of clergy to grave physical state of Ayatollah Seyyed Hosein Kazemeini Boroujerdi ,prisoner and protester clergy , and increasing pressurs on him and exiling him to prison in Yazd , his family and a group of his relatives (a population over than 300 numbers) gathered in front of the Unitd Nations office in Tehran at 10 P.M. on 25 Nov 2008 (5 Azar 1387) to protest aginst this situation . Although the nature of the gathering was peaceful and pacific ,but security forces and disciplinary officers and some factors in personal cloths (not uniform )disturbed the gathering by attacking the mentioned place and surrounding the streets near there and dispersed people by threatening them and making fear and horror .
Its necessary to say that in the end of this gathering , a resolution containing 3 articles was issued and expressed by people gathered. By this resolution they asked for indisputable releasing of Ayatollah Kazemeini Boroujerdi as an opinion prisoner , attending to his physical state and provide his life immunity.

There is the fule text of the resolution :
In the name of God the beneficent, the merciful
Greeting to and freedom
Honorable authorities of the United Nations office in Tehran ;
We are children and relatives of Ayatollah Seyyed Hosein Kazemeini Boroujerdi who have gathered here with no political leaning , just
because of the grave physical state of our father which has been confirmed by Dr.Hesam Firouzi, the international physician and we in a peaceful and pacific situation ask honorable authorities of the United Nations to pursuit of performing the followings :
1. Releasing our father, Ayatollah Kazemeini Boroujerdi who is an opinion prisoner, indisputably.
2. Giving life and belief immunity for our father and his family.
3. Considering his physical state and following up his treatment out of prison immediately.
We hope our demands will be considered as soon as possible.
Thank you
Other letters of Ayatollah Boroujerdi, films and vocal files of attack his house in Oct 2006 are enclosed here with his letter to UN.
Please click here to watch relative pictures

this government fear of every things even of pacific gathering.