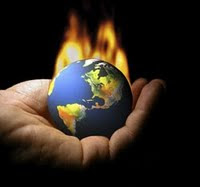 An answer to the invitation of Mr. Ban Ki-Moon the UN General Secretary, under the name “interference of the world’s religious leaders in solving the global warming crisis”

A selection of two messages of Ayatollah Boroujerdi in the years 2005-2006 A.D:

In this sensitive and important era that human’s world has been full of unknown and incurable diseases and has confronted with nature’s disfavour and anger and has been affected by disasters whip, let’s think of a remedy and ask the only omnipotent who runs the cosmos excellently to forgive our sins, let’s satisfy great Lord by having mercy on our subordinates and helping poor and miserable people in order to these difficult days be finished as soon as possible and mankind achieve peace and calm.

Let’s call our kind creature our friend and prevent from future threats, by real and practical thanking.

Hasn’t the hole in Ozone layer increased the statistics of skin cancer enormously?

Hasn’t the global warming disturbed the order of the North and the South Pole and made waters over flowing as many coasts are under the water?

Haven’t wars and adventurisms killed the international peace and security?

Hasn’t terror, violence and suicide exposed the life of blameless and innocent people to annihilation?

Hasn’t the deficiency of the plans and solutions of international intelligentsia about removing security, human and natural dangers and their failure in establishing international peace been proved and cleared?

Aren’t all these matters the result of human’s rebel against that Lord who has ordered to justice and recommended quality and acting according to conscience?

O’you who have clear thoughts, aware conscience and pure soul; shouldn’t you think about these worries?

O’you, the owners of church, please put the eternal love for God in people’s heart. O’clergies, please be away from government and politics, speak about the greatness, mercy and forgiveness of God and act to what you say in order to people become much nearer and closer to him.

O’ governors; government is not the end of progress, but is the outset of an endless way that helping all people is its long stairs.

In such this situation every principle and every school gives glad tidings and every leader presents a resolution, but unfortunately days and nights are spending in worry and regret, time is wasting and the rays of hope are extinguished.

O’you who are concern about this situation; O’ you, the great men of nations;

Isn’t it the time to resort and entreat to God?