The letter of Ms.Victoria Azad to Dr.Ban Ki-Moon, The secretary – General of the United Nation and Human Rights Agencies 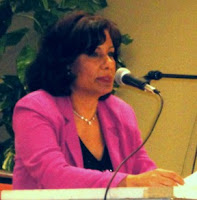 2010-06-09
To:
Dr. Ban ki-Moon, The secretary – General of the United Nation
Dr. Navi Pilay, The high commissar for UN Human Rights
Europe Union Human Rights Commission
Amnesty International
Human Rights Watch
Your Excellency!
According to recent events and evidence put forward by various independent human right organizations, the Islamic republic of Iran has put the people under immense pressure and dissidents are being imprisoned under false accusations such as “acting against national security”, espionage and even high treason.
These detainees are tortured both physically and mentally and now the government is using increased executions as a deterrent method.
We are sure that you are well informed on the recent five political executions and no doubt additional executions will take place.
Currently a balance of power between the people and its government is absent where few dictate their vote upon the rest. Even notable figures such Mir-Hossein Mousavi and Mehdi Karroubi whom are supported by the people have been threatened to either surrender or be detained.
The Iranian nation is at its most difficult and complex juncture in its history, some governments in our global community have adopted a very unfortunate and dangerous position where transactions are undertaken behind the curtains with the despotic religious authorities in Iran. It is these transactions that enable the continuing repression of the children of Iran, where minors are executed.
In light of these current events we once again ask of you to give special attention to these matters in order to put an end to the executions and torture of political prisoners and demand their immediate release. Please take prompt action and hold the Iranian government responsible for their actions against the international human rights treaties.

Currently a vast majority of the political detainees are considered enemies of the state. Amongst these detainees you have people from the secular oppositions of the Islamic republic of Iran and its pro-reform movement, these prisoners come from different religious and Ethnics groups such as Kurdish, Azeris, Baluchis and Ahwazis…., Journalists, artists, scientists, students, workers, women and teachers whom all are in threat of execution. Please see the following list below to find some of the political prisoners that are detained and tortured for fighting for their basic human rights and democracy:

i cant understand why Mr.Ban ki moon is silent!!!

Great information! I’ve been looking for something like this for a while now. Thanks!

Valuable info. Lucky me I found your site by accident, I bookmarked it.