A Petition to Establish a Global Campaign: No Politics-No Religion 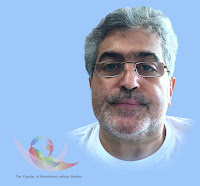 Boroujerdi's Call to Invite all People Suffered from Religion and Politics, to Establish a Global Campaign:
http://chng.it/K7YmKnft8m

We, the undersigned individuals and organizations, have concluded after decades of intellectual and practical research that the direction of politics in the world have been harmful and unfair throughout history, whereas that of religion have been unreliable.
In response to the invitation called by Boroujerdi, the founder of “Monotheism without Borders”, who has proved the incompetence of current religion based on his book called “the Encyclopedia of Appearance” in which several thousand justifications and
arguments in rejection of religion have been presented, we are currently not interested in the rule of politics over the world as well as rule of religion from each of faiths over the residents of our planet. Instead, we have chosen the third path which is No Politics-No Religion and we believe that this path will save mankind.
We certainly declare that the politics ruling on mankind not only in our time, but also throughout history, as recorded, had no advantage unless oppression on people, stealing people’s votes, looting the national wealth, discrimination and acting based on injustice. We also openly announce that there are disasters behind the veils of the religions and faiths and religion have been always a tool for opportunists as well as politicians to rule on the people.
We invite all people around the globe from all nations, races, and genders to pay more attention to this path and assist us to achieve global targets for the establishment of a world without war, untruth, massacre, slavery, and poverty through the third way which is No Politics-No Religion.

Wishing success in the achievement of these targets.