Juvenile, Bahman Salimian has less than 48 hours to live! 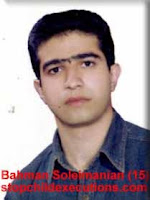 Dear Friends, Activists and Journalists,
I would like to bring your attention to Bahman Salimian, a juvenile on death row, who will be executed on February 5th in Iran. (Photo Attached)
Mohammad Mostafaei, a prominent lawyer working on child execution cases reported that Bahman Salimian, a minor on death row, is in imminent danger of execution. He is scheduled to be executed on February 5th in Iran. Stop Child Executions has informed the appropriate mechanisms at the United Nations, EU and other parliaments internationally. Within Iran, 150 lawyers have written an open letter to Iran's head of Judicary Ayatollah Shahroudi demanding a stay of execution for Bahman as well as an end to executions of juveniles.
Bahman Salimian is accused of killing his grandmother in 1996 at the age of 15. He repeatedly claimed in his trial that his 70-year old grandmother talked of committing suicide so he killed her to minimize her suffering.
According to Bahman's attorney, he was not in a normal state of mind at the time of the offence that he even attempted suicide shortly after he realized what he had done.
The trial judge had Bahman psychologically assessed. Expert concluded that he was suffering from a mental disorder therefore, his sentence was reduced to 5 years imprisonment and the payment of blood money. Other members of his grandmother’s family appealed the decision wanting retribution. Bahman was sentenced to death after 12 year imprisonment. Bahman is now 27 years old and kept in Isfahan prison.
His execution had been scheduled to take place on 28 August 2008 but was halted a few days prior by judicial authorities to allow for further reconciliation attempts in order to negotiate a pardon from the only relative who still insists that the execution is to go ahead. Two of his uncles had pardoned him, but the third uncle did not.
Please send your urgent action by phoning or faxing the Permanent Mission of the Islamic Republic of Iran to the United Nations:
Mohammad Khazaee, Ambassador and Permanent Representative
622 Third Ave. New York, NY 10017
Tel: (212) 687-2020 / Fax: (212) 867-7086
E-mail: iran@un.int
And writing to the Head of Judiciary in Iran
His Excellency Ayatollah Mahmoud Hashemi Shahroudi
Howzeh Riyasat-e Qoveh Qazaiyeh / Office of the Head of the Judiciary
Pasteur St., Vali Asr Ave., south of Serah-e Jomhouri,
Tehran 1316814737,
Islamic Republic of Iran
Phone: [00 98 21] 391 1109
Fax: [00 98 21] 390 4986
Email: Shahroudi@Dadgostary-tehran.ir
Salutation: Your Excellency

We demand an end to executions of children in all parts of the world, and the release of Ayatollah Boroujerdi advocated freedom of opinion who jailed in a prison in the city of Yazd in Iran