The detention of a family of Ayatollah Boroujerdi's followers 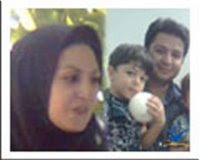 A follower of Ayatollah Boroujerdi, her husband and child were detained and transferred to an unknown point by security forces.
Yesterday morning February 17, the officials of Special Court of Clergy and of Ministry of Information referred to the house of lady.Zohre Sharifi, a follower of Ayatollah Boroujerdi, and detained her, her husband called Mohammad Ansari and her 5-year-old child( Amirmahdi) and confiscated and took some of their belongs. There is no information on their condition as yet.
It is reminded that lady.Zohre Sharifi had been detained along with ladies. Zahra Abdollahvand and Maryam Ghasemi opposed to Special Court of Clergy on January 28, but was released after first investigations.
The pressures on Ayatollah Boroujerdi who is detained in solitary confinement in Yazd prison, and also on his followers have been intensified during last weeks.
Human Rights Activists in Iran