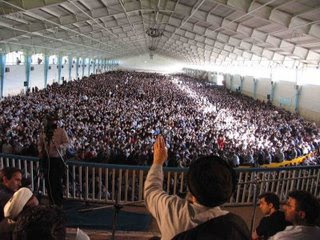 In the name of God the beneficent the merciful

We in addition to honoring the brave people of the oppressed and under religious despotism country, His Excellency Mr. Mir Hosein Mousavi and the zealous clergy Mr. Mehdi Karoubi also praising the right protests of the people against inattention to the sacred votes of the nation that has shouted the slogan of justice, announce our multilateral support on the divine and national insurrection of the mass of the oppressed people of Iran moreover we point out that the world concern on the gravity of the Human Rights situation in Iran is an usual matter and based on the aware conscience and no body can call it interfering in Iran affairs because Iran government is interfering in the affairs of Palestine, Lebanon, Iraq and Afghanistan in an unjustified way by abusing this subject(concern on Human Rights ) with all its equipments.
Today, noble nations have been annoyed for the lack of equality and freedom and the oppression and injustice applied on Iranian nation by the government and are planning to reflect the voice and the groan of millions of the injured people who are tired of this condition.

The followers and devotees of the liberal clergy, Ayatollah Seyed Hosein Kazemeini Boroujerdi who supports the separation of the religion from government

I enjoyed reading your blog. Keep it that way.