TIMMERMAN: Letter from an Iranian prison 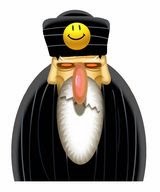 By Kenneth R. Timmerman October 18, 2013
A good measure of how a regime will behave toward its neighbors can be found in how it treats its own people.
As negotiations resumed this week in Geneva over Iran’s nuclear weapons programs, Iranian regime officials have taken an increasingly hard line, making it unlikely any progress will be made absent significant U.S. concessions.
Before Secretary of State John F. Kerry is tempted to give away the store in order to achieve a Pyrrhic victory, he would do well to listen to the voices of those the regime in Tehran has tried so hard to silence: its political prisoners.
Among the most prominent is a dissident Shiite ayatollah, Seyyed Hossein Kazemeini Borujerdi, who has been imprisoned and treated with ruthless brutality for the past seven years.

What was his crime? Refusing to acknowledge the role of Islam in politics, and rejecting the doctrine of absolute clerical rule, the founding belief of the Islamic regime in Iran.
The regime first threatened to execute him on June 25, 2007, after raiding his seminary in Qom and jailing thousands of his supporters.
I know many an old Middle East hand who think the Islamic regime in Iran is less a threat to the United States and our allies than the Islamic regimes in Pakistan or Saudi Arabia, because of the reputation Shiite clerics have long enjoyed of being more tolerant than their Wahhabi counterparts.
However, that tolerance stops with the ruling clerical elite in Tehran. Early on in their reign, they understood the threat posed to their legitimacy by dissident clerics who rejected the doctrine of absolute clerical rule, and established a Special Court of the Clergy to deal with them behind closed doors.
Ayatollah Borujerdi was initially brought before this special court after the security forces raided his seminary in Qom. In the end, he was tossed in with other political prisoners in Tehran's Evin Prison.
In a letter he addressed to the United Nations General Assembly that followers smuggled out of prison and published on Sept. 23, Ayatollah Borujerdi describes his plight as a hostage “within a prison cell, which is surrounded by a cruelty and brutality called religion and faith.”
He calls the regime in Tehran and the latest smiling mullah serving as a front man for the reign of the ayatollahs “brutal totalitarians [who] have plundered and stolen the wealth and national income of every Iranian.”
He ends his letter to U.N. member states with a plea to “focus your gaze on that which goes on inside Iran and scrutinize the actions and blatant human and civil rights violations of this regime.”
Ayatollah Borujerdi represents a body of senior traditionalist clerics who reject political Islam, which the U.S. administration of President Obama has embraced, from Tunisia to Afghanistan. This perhaps explains why the administration has ignored his plight, preferring the fool’s errand of negotiating with a self-avowed liar, Iranian President Hasan Rouhani, who boasts of how he tricked the West as Iran’s nuclear negotiator from 2003 to 2005.
Over the summer, the pro-Iran lobby in Washington found more than a hundred willing members of Congress, led by Republican Charles W. Dent of Pennsylvania and Democrat David E. Price of North Carolina, who called on Mr. Obama to “engage” the “new” regime.
Of course, there is nothing “new” about Mr. Rouhani, who has been a senior member of the ruling clerical elite since the early days of the Islamic Revolution 34 years ago.
As the supreme leader’s representative to the Supreme Council on National Security, Mr. Rouhani approved the orders to send hit squads to assassinate Iranian Kurdish dissidents in Germany in 1992, just as he approved the orders two years later to bomb the Argentine Israelite Mutual Association Jewish Center in Buenos Aires, killing 86 Argentinean Jews.
During his media blitz at the United Nations last month, Mr. Rouhani made clear that he is the instrument of the supreme leader, and that the goal of any “negotiation” with the West is to preserve Iran’s nuclear program while gaining an end to economic and political sanctions.
What Mr. Rouhani and his puppet master, Ayatollah Ali Khamenei, are willing to give up in exchange for lifting the sanctions should also be clear to anyone who actually reads or listens to what they say: absolutely nothing.
The only substantive pledge he and his slick-talking foreign minister have made is to talk about talks with the United States. Yet, that seems to be enough for a slobbering media to treat the two of them as though they walk on water.
Fool me once, shame on you. Fool me twice, shame on me.


This is the third time the United States has faced a “moderate” new president of the Islamic republic of Iran, who, with smooth talk and a winning smile, promises to kill us gently.
Will we never learn?