Sayed Boroujerdi may be in imminent risk of execution 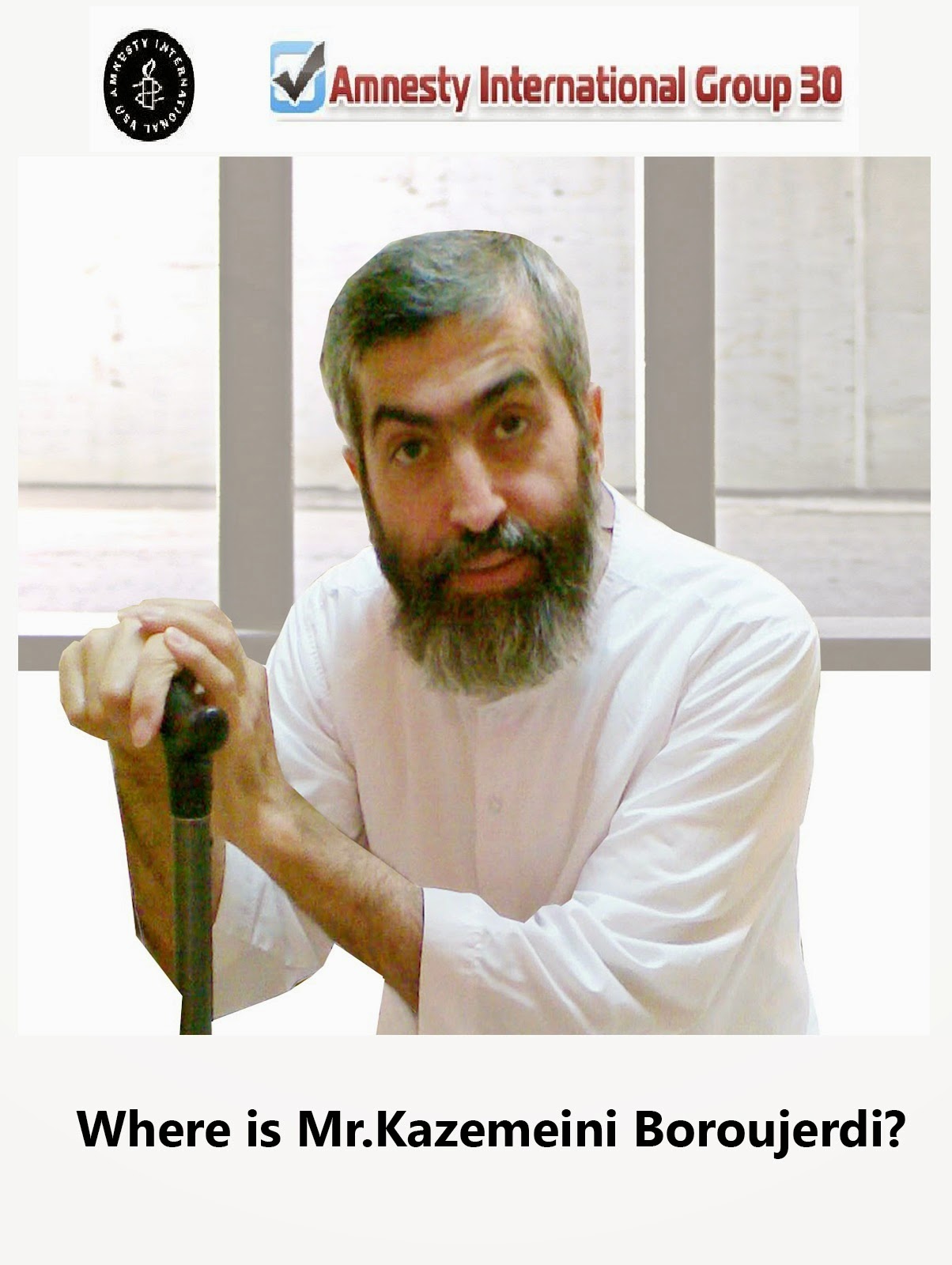 Amnesty -The Iranian authorities may be planning to use the noise of nearby political upheaval to rid themselves of him. Significantly, they appear to have moved him to an isolation cell, a strong signal that they are planning to execute him. Please write immediately. A sample letter is here.
Ayatollah Hossein Kazameini Boroujerdi has been held in Evin prison since his arrest in 2006. He is 56 years old.
Ayatollah Boroujerdi rejects the principle of political leadership by the clergy, a central feature of Iran’s constitution. He advocates the removal of religion from the political basis of the state. He publicly challenged the regime’s theological doctrine—promulgated by Ayatollah Ruhollah Khomeini in the early days of the Islamic Revolution of 1979—that only an Islamic jurist can rule the country. Mr. Boroujerdi instead supports the traditional Shiite view that religious leaders should stay out of politics and preach their messages to the faithful in mosques. Since 1994 he has been summoned repeatedly before the Special Court for the Clergy, and detained in Evin and other prisons.
He is the subject of an Amnesty International Urgent Action.
Ayatollah Boroujerdi has neither used nor advocated violence in the profession of his political views. Amnesty International considers him a Prisoner of Conscience.
Ayatollah Boroujerdi was initially sentenced to death, but due to appeals and international pressure, the sentence was changed to 11 years of imprisonment. He has been subjected to harsh interrogations and frequent torture.
Ayatollah Boroujerdi was arrested at his home in Tehran October 8, 2006, along with more than 300 of his followers, during violent clashes with the security forces. His 80-year-old mother was among those arrested and was allegedly ill-treated. His family has been consistently harassed and  threatened, and are under constant surveillance.
Held in Tehran’s Evin prison since his arrest, Ayatollah Boroujerdi suffers from Parkinson’s disease, diabetes, high blood pressure and heart problems. He had reportedly been denied permission to seek treatment at the prison’s medical facility. At the same time, prison authorities have repeatedly tried to coerce him to attest that he is receiving adequate medical treatment; he has refused.
Poor prison conditions, and torture and ill-treatment, have reportedly led to deterioration in Ayatollah Boroujerdi’s pre-existing medical conditions, and his health has deteriorated severely. His Parkinson’s disease has worsened, and he is suffering from permanent shaking of his legs and hands, and falls over frequently. He suffers from diabetes and high blood pressure.
On December 17, 2013, a European Union delegation was denied the opportunity of a meeting with Ayatollah Boroujerdi. Instead, he was brought to the Special Clerical Tribunal for especially harsh interrogation. He has reportedly been denied permission to seek treatment at the prison’s medical facility. Despite this, prison authorities have continually tried to coerce him to attest in writing that he is receiving adequate medical treatment; he has refused to sign.
Please write to urge that he receive immediate medical care, and for his immediate and unconditional release.
Sample Letter
President Hassan Rouhani
c/o Iranian Interests Section of the Islamic Republic of Iran
Embassy of Pakistan
2209 Wisconsin Avenue NW
Washington, DC 20007
Your Excellency,
I write from grave concern that Grand Ayatollah Seyed Hosein Kazameini Boroujerdi, a senior cleric, has been transferred to an isolation cell and is in imminent threat of execution.
Kazameini Boroujerdi has neither used nor advocated the use of violence in the peaceful expression of his political views. We oppose his arbitrary execution in the strongest terms, just as we opposed his being deprived of adequate medical attention during his imprisonment at Evin.
I urge you to see that mercy and reason prevail in the case of Seyed Hosein Kazameini Boroujerdi .
Sincerely,
Urgent Action Postcard
Please send a postcard directly to him.
The message should be bland, and very short: “We think of you often and wish for your strength. You are not forgotten. “
A return address is fine, as is using the name of AIUSA in your return address.
Please send postcards over the next two weeks and ask friends and colleagues to do the same. We want to raise his profile as much as we can. Even if he doesn't get the postcards, the authorities will.
Sayed Hossein Kazemeyni Boroujerdi
Evin House of Detention
Chamran Highway,
Evin Avenue
Tehran, Iran