Announcement on Anniversary of the Iranian Revolution 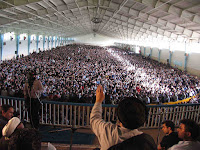 The movement began thirty eight years ago in Iran in the name of religion, had no other outcome but that of imprisonment and endless tortures for antidictatorship opponents. Our teacher’s father, Seyed Mohammad Ali Kazemeini Boroujerdi, who was one of the most prominent religious scientists of the country, was constantly facing pressures and sabotages of the regime during his life.
He was the most prominent and devoted server of God in the capital, during the Shah’s regime, yet during the current regime he was constantly being silenced and restricted, until 2003, when he was killed in an suspicious manner by the security forces of the regime, at the Mada’en hospital, Tehran. In Addition, this is the regrettable situation of our teacher who had been jailed in the secret prison of Towhid, (located between Ferdowsi and Sarhang Sakhayi and Darvazeh Melli streets) twenty five years ago, for teaching monotheism without violence, and theology without atrocities, and has been subjected to physical and psychological tortures; whose case is still open since that time, and he is constantly being aggressed, until his most recent period of imprisonment which lasted for eleven years, which destroyed his health and organs.

What crime did Boroujerdi Really commit?
He has never entered into conflict with the authorities of the regime for a seat in the government, and has no desire for material and worldly matters. Nevertheless, he has always been pursued and arrested and has never been able to conduct his spiritual teachings for his followers with peace of mind although during the last meeting before being arrested, the number of his students had grown to more than hundred thousand as it is recorded by the existing films and photos. The only desire of our teacher is to promote consciousness and to exalt dignity, and to preserve freedom and independence of thought, to oppose the governmental religion and the harassing acts of religious faiths.