The Teacher of Spirituality of the Current Era 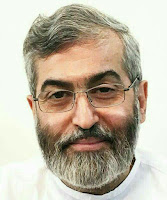 Our teacher, Seyed Hossein Kazemeini Boroujerdi was born into a clerical family, and as attested by genealogical and biographical books, all of his forefathers were among prominent religious authorities and leaders, from the A’raji family genealogy currently living in countries such as Iran, Iraq, Lebanon, Syria and Jordan.

Starting 1972, this independent teacher of monotheism entered Boroujerd, Qom and Tehran seminaries, where he engaged in religious studies. Today, forty years after studying and teaching, doing research and publishing, he is the theoretician of pure divine theories, and based on comprehensive and universal theological document, he has founded an academy for pure theism devoid of human tyrannies and excluding of persecution and oppression.
The teacher of the spirituality of the modern era believes in the complete disassociation of divinity from any kind of cruel religious rules, tyrannical laws and inhuman conditions. After thirty five years of continuous service as a clergy, this conscientious, honorable and justice seeking man, voluntarily and knowingly took out his ancestral religious garb so that he may show his respect to the Iranian nation, because of their hatred towards this challenged uniform; and by doing so, he announced his firm belief in the separation of faith from a garb which used to be considered as the symbol of the most noble habits in the society during the Shah’s reign, but now has turned into the most hideous garb that can exist.
This international figure, who, in the grips of an authoritarian regime, has continuously been imprisoned since twenty five years, expects to see accountability from the contemporary world that is alive due to freedom and independence.